A Look Into One Woman Veteran’s Efforts To Give Housing And Support To Homeless Veterans...

You are here: Home1 / Features2 / U.S. Feature3 / A Look Into One Woman Veteran’s Efforts To Give Housing And Support...

Despite their valiant efforts serving, many veterans come home to more struggles in the form of financial insecurities, culture shock, and homelessness. Wanting to help her fellow women service members recover, retired Army Staff Sergeant Alyce Knaflich has created the resources necessary in order to provide that stability so desperately needed. 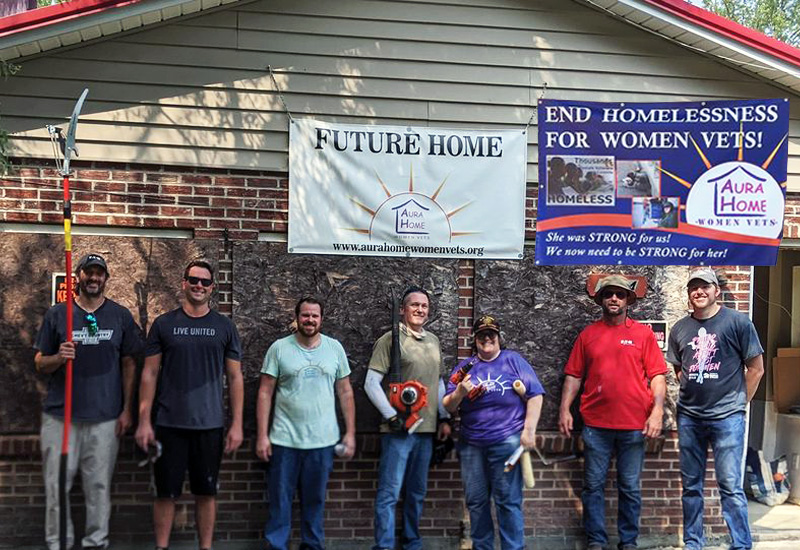 For many veterans, their fight tragically does not end when their tour of duty comes  to a close and they return to civilian life. According to the Military Times, over 37,000 veterans, or 21 in 10,000, were left without stable housing in the United States in 2020. Additionally, veterans make up 8% of the U.S. homeless population, despite making up just 6% of the total population.

Those numbers don’t sit right one bit to retired Army Staff Sergeant Alyce Knaflich. Thanks to her patriotic nature, Knaflich has been driven to create changes in order to bring housing, training, and stability to her fellow women service members going through difficult times. The result of her work is Aura Home Women Vets, a nonprofit organization founded in 2014 that provides not only housing for homeless women veterans, but also provides additional resources such as guidance and financial assistance.

Despite Aura Home’s best efforts, the numbers they fight against only continue to grow. “This homeless situation is horrible, [especially with] COVID policy fallout. People left and right are being evicted. People that have never been evicted before, who have never experienced homelessness before, are experiencing homelessness now.”

“The homeless situation is increasing, not decreasing. In September and October 2021, I spent more money in those two months than in the previous eight months because of the evictions.” Indeed, the COVID-19 pandemic has had a grim effect on housing stability: 2020 saw a 2% increase in the homeless population, also marking the fourth year in a row an increase has occurred.

“Prevention is the best and most cost-effective way of helping people, provided they approach you before they’re there, before they’re evicted or foreclosed. Why do you have to lose everything before you get help?”

Additionally, the rising cost of housing and lack of affordable housing is a major trend that only continues to further prevent veterans from finding a permanent roof over their heads. “What we do, when they come to us, is [to put them] in hotels until we get them into the transitional housing here,” Knaflich stated.

“They don’t want to stay in shelters because they can’t live there. They come in, spend the night, and they have to leave every day. There’s no guarantee when you come back the next evening that you’ll get a bed. Then all the other barriers they put in place, it’s just ridiculous. [The shelters] treat them worse than prisoners.”

When it comes to the housing woes veterans face, Knaflich’s best tactic is simple: stopping them before they lose housing. “Prevention is our primary [method]. We pay their rent, or [for those being evicted] help them find another place,” she said regarding their prevention methods, also noting Aura Home helps tenants with deposits on utilities, or by simply finding furniture.

“We do whatever needs to be done. Aura Home did house repairs for a women veteran that had a trailer. Someone had given her a trailer that was in pretty bad shape. This trailer had holes in the floor. Her children would have to jump over the holes to go from room to room. You don’t know what’s going to crawl up through that hole. I said, ‘This is not a habitable house [for] children.'”

“So, we paid for flooring to be put in her trailer. We don’t do the physical work, but we hire someone to do the work. If the veteran can do the work, we provide the materials so they can do the work.”

Knaflich explained that daily activities, such as going to the movies or to a restaurant, can certainly be viewed in a different light when taking into account the misfortunes others go through. “All these things, people take for granted. Homeless people don’t have those opportunities. The money that you spend going out to eat is like two weeks worth of groceries for [homeless veterans].” 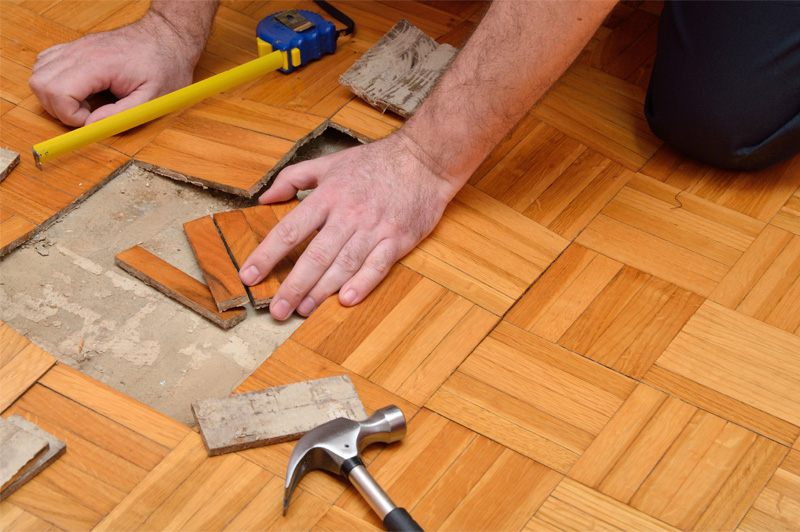 “They need medical care; they need mental health care, other financial needs or legal. It’s a plethora of things.” 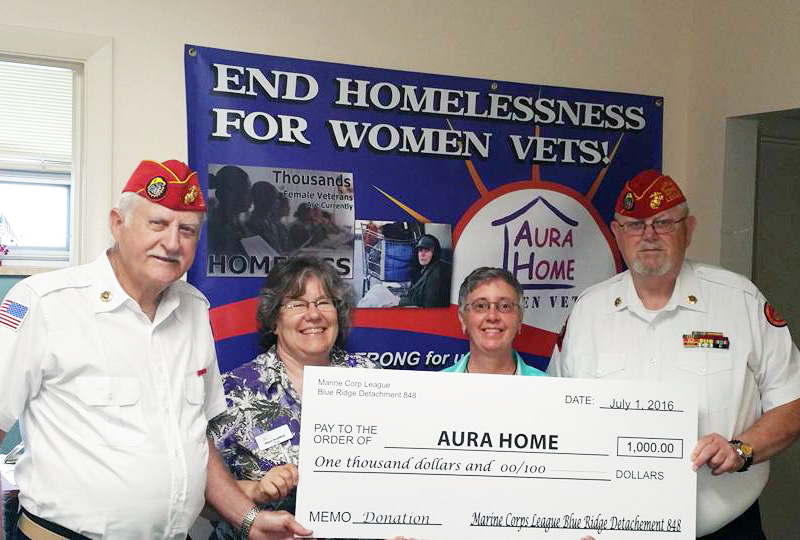 An individual’s housing situation draws back to the most frequent dilemma for many of Aura Home’s veterans – financial problems. “They come facing some sort of financial crisis. That’s the initial thing, because there’s so much more behind the story.”

Knaflich also communicated her belief that treatment in the shelters intensifies further drug and alcohol usage and exasperates mental health conditions among house-less individuals, leading to hopelessness. “They’re on drugs and alcohol because that’s all they got to relieve the pain and anguish of their current life situation,” Knaflich said. “They feel like their life is over.”

Knaflich and her volunteers — Aura Home has no paid employees — have had to expand their already valiant efforts during the pandemic. “Well, I went and doubled my hours of working to make sure the women are safe, giving them masks and things to protect themselves and their families.”

Supply shortages and protocol changes also affected Aura Home Women Vets. “I worked hard getting them food and those household products to keep things rolling,” Knaflich stated, an example of the unending perseverance and dedication she has for her cause.

Even more impressive is the fact that Knaflich funds much of Aura Home Women Vets, where she operates as director, with her own income. According to her, the greatest satisfaction she receives from the organization is being able to “help one more women veteran to get their benefits.” “I helped one more veteran successfully progress in life,” she said. “I helped women veterans from giving up. So many have come back and said, ‘Thank you, Alyce. Thank you!'”

Managing a nonprofit such as this can break even the most resilient, but Knaflich is proud of the work she’s put in – along with the subsequent results. “I started with below zero [dollars]. Most businesses are out of business within three to five years when they start up. So I’m doing something right,” Knaflich laughed.

“Veterans are trained to work in teams to complete the mission and rely on leadership for guidance. Not to [have a] ‘close the door in your face’ attitude.”

Many of the emotional, physical, and equity obstacles the veterans her nonprofit helps face, Knaflich has gone through herself. During her military service, she experienced military sexual trauma (MST), which 33% of women in the armed services experienced.

“After almost 20 years in the military, I got out of the service, finished my Bachelor’s Degree, started working a new career, and in less than a year, I was fired. And I got fired partially because I was a woman,” Knaflich explained. Following her firing, Knaflich was diagnosed with post-traumatic stress disorder (PTSD), which limited her work ability.

“I was told by the VA [Veterans Affairs] in 1997 that I could not work anymore, so that brought me to homelessness because the compensation I was supposed to be receiving, they kept. I did not get financial compensation.” Knaflich stated she only started receiving her compensation in 2005.

That homelessness Knaflich endured for almost 10 years was a major reason she started her nonprofit, the veteran said. “In 2007, there was a big push from the VA [where they said], ‘We’re going to get all the homeless veterans off the street,’ and I got involved with that.”

During the years spent working with homeless and veterans organizations and VA volunteering, Knaflich passionately believed that women veterans’ needs were not being addressed effectively enough, and aspired to aid those who, despite having given so much, are at their lowest points.

“This is why I fight so hard for women, we’re not equal. Even in the military, we’re not equal,” Knaflich said, claiming she witnessed “double standards” during her service time. “Physical training, uniforms, I hated wearing the skirts when marching in the parades. They made you wear heels on the parade ground.”

Another obstacle Knaflich fought following her military retirement was integrating back into a civilian role. “We are, especially overseas, [we] are isolated from whatever’s going on in America. So, culturally, I was different from everyone. My experiences were different from civilians. I could not talk to anyone about anything in the military because they never served, they have no clue.” Because of this, Knaflich felt isolated and a need to catch up culturally with happenings, from movies to books.

In order to overcome these struggles upon arriving back home, Knaflich and her fellow veterans need a strong resilience, one that would never let them give up – no matter how intimidating the odds. “I think the military gave us that training. Keep on going, keep on going forward. You have to have discipline.”

If you’re interested in learning more about Aura Home Women Vets work for homeless women veterans, you can visit their website. 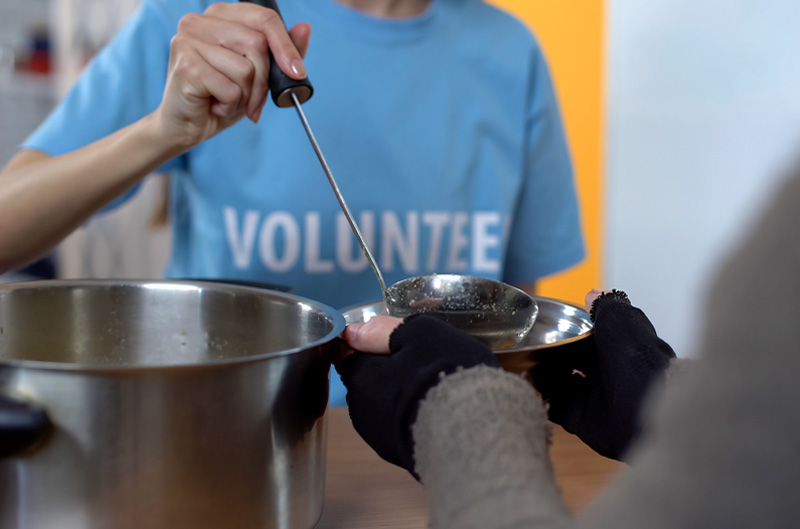