Blog - Latest News
You are here: Home1 / Around The Web2 / Science3 / A New Spin On Lab-Grown Meat 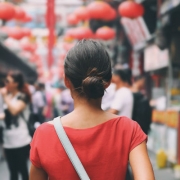 People might one day grow meat in factories instead of having to harvest it from farmed animals. So far, attempts at lab-grown meat haven’t managed to match the texture of the animal muscles eaten as meat. Scientists have been working to coax cells to organize into something like the fibrous meat that ends up on our plates. One new development does this using a technique akin to spinning cotton candy. It grows meat with more structure.

Growing meat in a lab could mean using fewer animals and lowering the environmental costs associated with raising livestock. It takes a lot of land and water to grow animals. Also, “we all like animals, but we like to eat meat too,” says Luke MacQueen. He’s a tissue engineer at Harvard University in Cambridge, Mass. Move the process outside of animals, and scientists could grow only the meat parts they want, he says.

Researchers already know how to grow cells, the basis of meat. However, a pile of cells doesn’t have the chewy texture of a chicken breast. Cells without a support are more like a soup, or at best a meatball. So MacQueen and his team developed a way to make a scaffold to support their growing cells.

The new process resembles the way cotton candy is spun, except that it uses gelatin instead of melted sugar. The scientists spin the gelatin-containing solution to make tiny fibers. When the sopping strings hit a bath of ethanol, a type of alcohol, they lose their water and dry out.

Then the scientists add stem cells — a special type of immature cell — that will develop into muscle cells. The team uses stem cells that become either cow or rabbit muscle. As they grow, these cells work their way into the edible gelatin scaffold.

The scientists grew tissue squares that were roughly 6.5 square centimeters (1 square inch) in area and a millimeter (0.04 inch) thick. They used a slew of techniques to image the chunks and study their properties. The team then compared their lab-grown rabbit and bovine tissue, after one to three weeks of growth, to meat from animals: bacon, prosciutto, beef tenderloin and more.

The lab-grown samples all looked like the natural meats, MacQueen says. And they had similar materials properties too. Those traits affect how chewy, springy or soft the tissue is. By controlling how the gelatin fibers had been spun, the scientists could set the fibers’ alignment and spacing. That determined if the tissue ended up more like a burger or a steak.

The team’s work is “a great step in the right direction,” says Kate Krueger. She’s a biochemist who was not involved in the new study. She works at New Harvest, a non-profit institute that funds food technology research, in Boston, Mass.

Another challenge: Because it’s meant for scientific research, the nutrient mixture that feeds cells in the lab uses high-purity ingredients. To grow meat for the masses, Krueger notes, the high cost of feeding cells will have to come down.

Muscle-cell biologist Paul Mozdziak works at North Carolina State University in Raleigh. What the Harvard team has not done yet, he says, is “make something that’s really at the thickness or texture of a whole-muscle product.”

He is excited about using technology to grow meat. But Mozdziak also suggests caution about lab-grown meat’s prospects and impact. “Whether it’s good or not good for the environment is arguable,” he says. Especially if it just adds to the meat people already eat, he adds. Still, “what’s exciting is coming up with new methodology to make food.”

Krueger agrees. “We’re taught in many ways not to play with our food [or] think about it as something that’s made out of chemicals.” But from organic apples to Twinkies, “food is an amazing biotechnology,” she says. “Food is something we can innovate.”