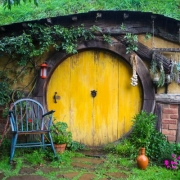 Award-winning actor Andy Serkis is perhaps most well known for voicing the iconic character of Gollum in the blockbuster movies The Hobbit and The Lord of the Rings, and fans of his will know that his voice over skills really are second to none. In true creative style and to help raise valuable money for two charities close to his heart, on Friday 8th May, Serkis conducted a continuous 12 hour live reading of The Hobbit during which he included all of the voices of the various characters in the tale, giving his storytelling true authenticity.

The online live streamed event was created to help raise money for NHS Charities Together and Best Beginnings, the latter of which he has been an ambassador of for a number of years. In an exclusive interview with Sky News prior to the event, Serkis expressed his excitement at embarking on the marathon literary session and his commitment to reading the entire book from start to finish. Despite being a momentous challenge to take on, especially as he admitted he’s partial to a little snooze once he’s sat comfortably in a chair, Serkis felt that those who have been experiencing lockdown for so long deserved to be able to go on a thrilling adventure even if it is from the comfort of their own armchair, and what better one to follow than this iconic race across Middle Earth!

Serkis was aware that so many people have been embarking on fundraising activities such as marathons and other sporting activities, but for a lot of people who are in the highly vulnerable category, or have loved ones that are, going outside isn’t something that’s always practical or possible. Many people don’t even have gardens in which to go out in either and the feelings of boredom and loneliness caused by self-isolation has been of particular concern in recent weeks. This got Serkis thinking about what else could be done in terms of a ‘marathon-style’ effort without involving the physical activity or going outdoors. That’s when he came across the idea of his armchair marathon, where the entire epic could be played out while the audience simply sits and listens.

In preparation for his marathon reading session, Serkis conducted a 60 page practice run, but kept all of the character voices under wraps until the live performance. He also armed himself with an array of snacks and drinks to help keep him fuelled for the duration.

Indeed, Serkis’ portrayal as Gollum in The Hobbit and the Lord of The Rings film series has become one of the most iconic of the modern day appreciation of this story, but as many who have followed Serkis will know, he has cultivated an impressive repertoire of performance successes over the years. He lent his impressive voice to the Ceaser, leader of the apes in the latest Planet of the Apes movie and to Supreme Leader Snokie in The Force Awakens and The Last Jedi.

His exceptional skills as a voice actor once again came into play as he took on the challenge of not only reading The Hobbit for a staggering 12 hours, but including all of the character voices too. Many of these have been portrayed by different actors over the years, so Serkis brought some of the most recognized elements to his tale, whilst also following his own unique interpretation for each. As we know, any good storyteller really makes the effort to portray the characters as they speak, so this rendition of The Hobbit was nothing less than a masterpiece.

Aside from Serkis’ affiliation with Gollum, there is a deeper meaning behind his decision to tell this tale at this moment in time. Many anecdotes of experiences during lockdown have cited the experience as enabling people to discover more about themselves and has even led them to view the world in a different way than they did before. Serkis compares this to the experiences of Bilbo Baggins, who was at first a very reluctant traveler but who was able to discover incredible things about himself and the world around him once he chose to embark on his wonderful adventure.

Serkis is keen that this charitable and extraordinary endeavor is seen as his own way of saying thank you to everyone who has obeyed the rules and stayed indoors, thereby helping to reduce the spread of the infection and reducing the burden on medical staff and healthcare facilities. Despite the event now being complete, donations can still be made via the official Go Fund Me page here. Whether Serkis goes on to tell yet more thrilling tales from The Lord of the Rings trilogy remains to be seen, but at the time of writing there were no further plans.