Blog - Latest News
You are here: Home1 / Around The Web2 / Technology3 / Adventure Technology Could Make Extreme Climbing (a Little) Easier 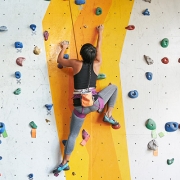 A record number of climbers are venturing up the world’s tallest summits each year to test their limits. These adventurers often train for years to prepare themselves for the harsh terrains they will try to conquer. But as ecological conditions worsen, even one false step could put the most seasoned hiker in peril.

One man who knows the risks and rewards of mountaineering is Northrop Grumman engineering manager Jim Diani, who has successfully climbed all Seven Summits (the seven continents’ highest mountains). Having recently summited the world’s tallest peak, Mt. Everest, Diani shares his first-hand experience of what it’s like trekking through unpredictable situations and how technology could help save lives.

“Sherpas are people of the land,” says Diani. They’re native to the mountainous Himalayan regions and have adapted to the high altitude, low oxygen environments that foreigners are unaccustomed to. Their job is to support expedition teams along their trek by preparing the hiking route, setting up camp, carrying gear and food, and guiding them to safety.

The Sherpa method for climbing Mt. Everest remains traditional. They use yaks to haul equipment to each basecamp, ropes and ladders are placed on the route to help people maneuver around tough peaks, and the protective clothing they use are low-tech regular mountaineering gear.

Their elite mountaineering skills and acclimatization abilities allow them to maintain a traditional lifestyle, unlike Western trekkers. “They’re tough people from a very early age,” describes Diani. “I’ll have $1,000 worth of gear on to keep me warm and there will be a mother bathing a child outside in near-freezing temperatures with cold water.”

Recent studies show that Sherpas are in fact more genetically acclimatized for harnessing oxygen and converting it into energy compared to the average person. Because of this, Westerners must use advanced technologies to better prepare for their climbs in order to keep up with their native guides.

Over the past couple of decades, technology has made a significant impact on the adventure industry. Satellite communications give climbers better situational awareness and help direct them to their destination. There are hiking trail phone apps, like Guthook Guides, that work offline and use the phone’s internal GPS to give beginners the ability to hike long trails on their own. Weather at higher elevations is incredibly unpredictable and extreme. There’s only a short weather window on Mt. Everest that allows for safe climbing. Climbers used to base their ascent on long-range forecasts that were unreliable. Now, there are more accurate weather prediction systems that provide the most up-to-date information.

Helicopters make rescue missions more feasible but are still risky. In 2015, a 7.8 earthquake hit Mt. Everest, destroying the icefall route and causing avalanches that led to the deaths of multiple people. Diani and his crew were trapped above the icefall and were eventually rescued. “The helicopter barely touched down,” he recalls. “Loading had to take less than 30 seconds, so one-by-one people would run and jump into the helicopter. The pilot then tilted forward, making the helicopter descend down the icefall and land on a makeshift landing pad, which was just rocks.” As high altitude rescue remains difficult, there is great potential for autonomous recovery vehicles that could offer a safer solution.

Extended times in a high altitude environment is the greatest challenge to climbing the tallest peaks in the world. The amount of oxygen in the bloodstream decreases significantly at higher elevations, causing a variety of negative symptoms. “The altitude affects you physiologically and psychologically,” Diani explains. “You don’t have the same oxygen for your body, so it’s more difficult to digest food, there’s a loss of appetite, you become dehydrated quicker with the lower pressure, you are rapid breathing for days, and there’s some loss of cognitive ability.”

In some cases, climbs need to be a rapid ascent due to environmental factors that come to play on the summit. There’s not much time for individuals to acclimatize during their climb, so it’s imperative to prepare beforehand. Hypoxic training, also known as altitude training, is the only proven way for people to pre- acclimatize to high levels of elevation.