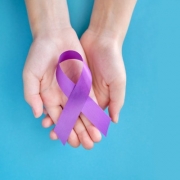 National treasure and beloved host of ‘Jeopardy!’, Alex Trebek, has given a further health update on his battle with pancreatic cancer. The game show host said that he is battling fatigue but progressing positively and looking ahead to the future.

Last year, to the dismay of many fans across the country and world, Trebek was diagnosed with stage four pancreatic cancer and announced his decision to step down from ‘Jeopardy!’ to concentrate on his recovery. The 79-year-old has expressed the difficulties he has faced throughout his battle and has inspired many with his continued upbeat attitude and strong will to live.

“I’m doing well,” Trebek announced in a video that was posted to the show’s official Twitter account. “I’ve been continuing my treatment and it is paying off though it does fatigue me a great deal. My numbers are good. I’m feeling great,” the host added, showing off his lockdown facial hair.

Trebek also went on to confirm the arrival of his new book – a memoir that will be released on July 21, the day before the star’s 80th birthday. Simon & Schuster will publish the book and it will be called “The Answer Is…: Reflections on My Life,”.

“The book combines illuminating personal anecdotes with Trebek’s thoughts on a range of topics, including marriage, parenthood, education, success, spirituality, and philanthropy,” reads the book description on the publisher’s site.

“Trebek also addresses the questions he gets asked most often by Jeopardy! fans, such as what prompted him to shave his signature mustache, his insights on legendary players like Ken Jennings and James Holzhauer, and his opinion of Will Ferrell’s Saturday Night Live impersonation,” the description reads. “The book uses a novel structure inspired by Jeopardy!, with each chapter title in the form of a question, and features dozens of never-before-seen photos that candidly capture Trebek over the years.”

The latest update is the first since the coronavirus pandemic started and fans of Trebek and the show will be relieved to hear of the presenter’s continuing good health and happiness. Back in March, Trebek took to social media to announce that he had beaten the cancer’s one-year 18% survival rate but admitted that he had found a number of things extremely difficult and surprising.

“I’d be lying if I said the journey had been an easy one,’ the beloved game show host admitted. ‘There were some good days but a lot of not so good days. I joked with friends that cancer won’t kill me, the chemo treatments will.

“There were moments of great pain, days when certain bodily functions no longer functioned and sudden, massive attacks of great depression that made me wonder if it really was worth fighting on. I brushed that aside quickly because that would have been a massive betrayal, a betrayal of my wife and soulmate Jean who has given her all to help me survive,” he said.

“I wished I had known sooner that the persistent stomach pain I experienced prior to my diagnosis was a symptom of pancreatic cancer,’ Trebek said in the clip posted to Twitter. Other common symptoms can include mid-back pain, unexplained weight loss, new onset diabetes and the yellowing of the skin or eyes.

“I decided to join forces with the World Pancreatic Cancer Coalition to make the PSA because more attention and awareness are needed to help patients fight and survive this disease.
“Together, we can get it done.”

In the video update, Trebek also told fans that ‘Jeopardy!’ would be selecting old episodes to air once again. Viewers will get to relive classic moments and victories, as well as being able to see how the show, as well as Trebek, has changed over the years.

“For the first time ever, we are going to open the ‘Jeopardy!’ vaults and take another look at some of our favorite episodes, including the very first ‘Jeopardy!’ show I ever hosted, mustache and all,” he said.

“I can’t wait to return to the studio and start recording shows for the new season in September. Meanwhile, my wish for all of you – stay safe,” Trebek concluded.

“This summer we’re taking you on a four-week journey to rediscover some of our favorite shows in Jeopardy! history. Get ready – we’re opening up the Jeopardy! Vault!,” an announcement on the show’s website read.

“Our producers combed through 8,000 episodes and have selected 20 shows that highlight key moments, contestants and gameplay over the course of 36 seasons, many of which have not been aired since their original broadcast. These shows also include several milestones, some headline-grabbing moments and – from the days before viral videos – some rare scenarios that had fans buzzing around water coolers across the country.”

“’This … is … Jeopardy!’ Those iconic words from Johnny Gilbert were uttered for the first time to open the premiere episode of Jeopardy! on September 10, 1984. A fast-talking Alex Trebek explained the rules of the game, and we were off on a journey that would span over 8,000 episodes (and counting)!”

Drive In Entertainment Is the Future of Fun