Blog - Latest News
You are here: Home1 / Around The Web2 / U.S.3 / Alexandria Ocasio-Cortez to Endorse Bernie Sanders For President 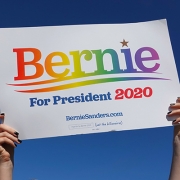 The progressive congresswoman Alexandria Ocasio-Cortez is set to endorse Bernie Sanders in the race to be the Democratic party’s nominee for the White House next year.

During the fourth Democratic debate on Tuesday night Sanders, 78, who had been recuperating since suffering a heart attack that raised questions about his health, teased the appearance of a surprise guest at a Bernie’s Back rally scheduled for Saturday in New York.

That triggered a wave of online speculation and a report from the Washington Post that Ocasio-Cortez would be joining the Vermont senator onstage and endorsing him in his bid for the presidency. The Guardian later confirmed the news.

Ocasio-Cortez’s shock move ends months of speculation about the plans of the Bronx politician, who is hugely popular with the progressive wing of the party.

Council Post: The Drawbacks And Upsides Of Being A Small Business
Scroll to top