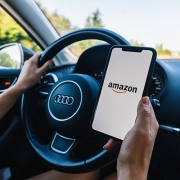 SEATTLE—Amazon is expanding its Fire TV Edition program, enabling the entertainment service to be used across things like smart TVs and streaming media players, as well as new avenues like auto manufacturers and soundbars. The updated Fire TV will offer specific tools and services to better integrate it into products.

For the first time, Amazon is expanding its Fire TV program to automakers, announcing a partnership with BMW and Fiat Chrysler Automobiles. This will enable living room-like experiences in the car with hands-free access to Alexa, a touchscreen interface and offline playback capabilities. Content can be recorded with Fire TV Recast or saved locally on-device, or streamed over a vehicle’s Wi-Fi, LTE, mobile hotspot or any WAN-enabled device.

Television and telecommunication operators will also now have easier access for offering Fire TV to their customers, Amazon announced. Following Fire TV partnerships with Tata Sky in India and Verizon in the U.S., operators in North America, India, Europe and Japan can choose an appropriate Fire TV offering as well as merchandising opportunities.