Blog - Latest News
You are here: Home / Around The Web / Technology / Apple Is Still Slowing Down Old iPhone’s 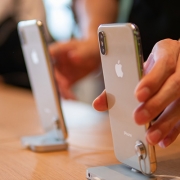 New models of the Apple iPhone are released almost yearly, be it a slightly upgraded version or a completely new phone but many customers still hanging onto old models have long suspected that Apple is deliberately slowing down their phones. The reason for which, was thought to be Apple’s way of compelling consumers to upgrade to the latest version of the iPhone. A reasonable conclusion, as we have become accustomed to instantaneous information and high-speed devices many of us find lagging technology a source of irritation – long gone are the days of dial up connection and slow loading programs. In 2017 Apple admitted that they had been reducing the performance of old iPhones but argued it was to ‘prolong the life’ of said phones. This year, Apple was once again fined for slowing down iPhones without properly informing consumers.

The latest fine equating to 25 million euros (27 million dollars) was enforced by France’s Watchdog DGCCRF. It comes after 2018’s 5 million euro fine (about $5.7 million) from the Italian Competition Authority, AGCM, of both Samsung and Apple on similar charges. According to CNET, Apple and Samsung were fined for ‘urg[ing] people to install updates that weren’t “adequately supported by their devices,” the AGCM said, adding that Apple and Samsung failed to provide customers with an “effective way to recover the full functionality of their devices.” This pushed consumers to buy new devices, according to the AGCM.’ This year’s fine, from the French Watchdog was on similar charges as reported by the BBC “The French watchdog said iPhone owners “were not informed that installing iOS updates (10.2.1 and 11.2) could slow down their devices”.”

Why do these smartphone companies slow down phones?

According to Apple in 2017, the slowing down of older iPhones was implemented to preserve the aging of the lithium-ion batteries used in the iPhones. Lithium-ion batteries are particularly prone to quick deterioration but as all batteries age they do not hold as much charge as they would brand new. This can cause problems such as unexpected shutdowns, worsened when the charge is running low or exterior temperatures are low. As many users will know, Apple releases regular universal updates which reach every Apple product regardless of specification. As iPhones develop in technology and capability, these updates are more and more complex so some of the processing speeds required for newer phones were overpowering older phones (such as the iPhone 6) and causing them to flatline. In order to address this issue, Apple released updates which would deliver “better battery management capabilities”. Essentially, this was achieved by slowing older phones. However, not everyone saw these updates as a positive and trustworthy explanation, as the French Watchdog stated Apple “committed the crime of deceptive commercial practice by omission”.

The batteries are another recognized part of the problem. The Italian Competition Authority fined Apple a further 5 million euros for failing to adequately provide customers with information that would enable them to properly maintain and replace their batteries.

How can you preserve your old iPhone?
Let’s face it, smartphones can be pretty pricey and although a new phone every year is alluring, sometimes it is just not financially viable or, perhaps you just prefer to stick with one model that you are happy and comfortable with. How then, do you keep hold of an old iPhone?

You may have come across people that try to avoid updating their phone but this is not necessarily the best way to optimise performance for longer. Apple advises customers to update to the latest IOS in order to preserve battery, despite the claims from the companies above. There are, however, several pre-emptive procedures that you can take to preserve your battery for longer. Utilising iPhone settings such as low power mode, turning off background activity, dimming the screen and using wi-fi where possible are all options that keep your battery healthier for longer. Other habits, such as leaving your battery on charge for long periods of time, is claimed to decrease battery life. Apple advises that leaving the iPhone to completely lose all charge will not harm the battery, it does not matter when you charge your iPhone, the battery can handle small periods of charge time, it does not need to always reach 100%.

The main suggestion however, is to replace the phones battery when it begins to slow. It is likely to cost anywhere between $50-$70+. Check your iPhone’s warranty first, you may
be entitled to a free replacement under Apple Care. Apple do provide a battery replacement service and are often regarded as the best place to get a replacement but there are perfectly suitable third-party companies that can do this as well. By replacing the battery your phone may work perfectly again and many customers have claimed that this has seen their phones back to full working capability.

Should You Rent or Sell Your Home?

Americans Flock to Fiji, And You Can See Why
Scroll to top