Blog - Latest News
You are here: Home1 / Around The Web2 / Science3 / Are Electric Vehicles as Good for the Environment as Advertized? 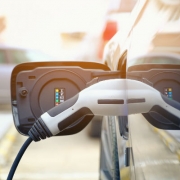 With so many people claiming that electric vehicles are in fact bad for the environment, we take a look at the data.

We’ve all seen it in the comments sections of social media posts. There are always a few people adamant that electric vehicles pollute more than internal combustion engine vehicles.

At best, they claim the electric vehicle (EV) industry is scoring an own goal by creating a technology that, throughout a vehicle’s lifetime, pollutes more than internal combustion engine (ICE) vehicles. At worst, they say it’s all part of a conspiracy aimed at filling the pockets of clean energy providers.

Whether you are a proponent of electric vehicles or not, one issue is widely accepted: EVs release a lot of CO2 during the manufacturing process. This is due largely to the production of lithium-ion batteries.

A new IVL report, released this month, says, “according to new calculations, the production of lithium-ion batteries on average emits somewhere between 61-106 kilos of carbon dioxide equivalents per kilowatt-hour battery capacity produced.”

However, this figure keeps improving. The figure above, for example, is an improvement on the same organization’s study in 2017 that said, “an electric car with a 100kWh battery [emits] 15-20 tons of carbon dioxide even before the vehicle ignition is turned on,” with emissions of 150 to 200 kilograms of carbon dioxide for each kilowatt-hour storage capacity in a car battery.

What’s more, as a 2018 International Council on Clean Transportation (ICTT) report points out, the country in which batteries are manufactured as well as the materials used has a great impact on the level of emissions produced. This means there’s a better way to manufacture EV batteries and it’s down to countries to implement it.

A study that compares the emissions of EV and ICE production in China further emphasizes the role of infrastructure in reducing emissions in EV manufacturing. The study claims that Chinese EV battery manufacturers could cut their emissions by 66% if they employ American or European manufacturing techniques.

Tellingly, even the 2017 IVL study on battery emissions, which emphasized the large CO2 emissions of production, didn’t call for EVs do be disowned and ICE vehicles to come back to the fore.

Instead, the scientists behind the study said the focus going forward must be on optimizing battery production. They called on governments to implement regulations that enforce efficient production.