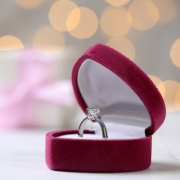 2020 has been a challenging year for couples looking to tie the knot with restrictions preventing ceremonies from going ahead. Despite this many couples have found safe and creative ways to share their celebrations with their family and friends, including broadcasting their ceremony via social media platforms. A number of celebrity couples got engaged in 2020 including retired tennis pro Maria Sharapova and her partner Alexander Gilkes, Mean Girls actor Jonathan Bennett and his partner Jaymes Vaughan, and singers Gwen Stefani and Blake Shelton. A further couple that have recently announced their engagement is international singer, songwriter and actress Ariana Grande and her real estate partner Dalton Gomez.

Grande, age 27, announced the engagement through a post on her Instagram page to her 211 million followers. The post was caption “forever n then some” and featured a couple of pictures of herself with the engagement ring and some pictures of her and Gomez together looking very happy. The ring featured both a pearl and a diamond. “They couldn’t be happier, they’re just so excited. This is a happy time for them, both sets of parents are thrilled,” a source was quoted as telling US magazine People” reported the BBC.

Many international stars commented on Grande’s announcement post sharing their congratulations with the couple. Actress and filmmaker Diane Keaton commented “CONGRATS!!!” and Khloe Kardashian said “Ahhhhhhh congratulations beautiful!!!!!! Forever Blessings!!!!!” followed by three heart emojis. Grande’s family also shared their congratulations on the post with her mother, Joan, saying “Sooo sooo sooo happy!!!! Love you two!!!” and half-brother Frankie Grande saying “I am so happy for you both and so excited to (officially) welcome Dalton into the family! YAY! This is just the beginning of a long-lasting life filled with laughter & love. Ugh. I love you both! HAPPY ENGAGEMENT!” followed by a series of love and celebration emojis. In addition, Hayley Bieber, Scooter Braun, Kim Kardashian West, Bella Hadid, Millie Bobby Brown and Ashley Tisdale were among the many well-wishers.

Reportedly both living at Grande’s home in Los Angeles, the couple were first linked at the beginning of the year after they were spotted kissing at a restaurant in Los Angeles. They have kept most of their relationship away from the public eye, but Gomez did feature in the music video for Grande’s chart-topping collaboration with Justin Bieber “Stuck With U” in May and they have been featuring on each other’s Instagram pages. Gomez is not in the public eye, with his Instagram set to private, but it is known he was born and raised in South California and has a number of years experience working in luxury real estate.

Despite the challenges, 2020 has also seen many successes for Grande. In late October, Grande released her sixth studio album “Positions”, which debuted at Number One on both the US Billboard 200 chart and the UK Album Chart. In the UK she achieved the double as the title song from the album was also Number One single and in the US there was a time where all 14 songs from “Positions” charted in the Billboard Hot 100 simultaenously. Songs from the album include “Positions”, “34+35” and “POV”, all of which have become viral sounds on TikTok with many creators posting videos featuring the songs. She also collaborated with other famous performers on some of the songs including “Motive” with Doja Cat, “Off The Table” with The Weeknd and “Safety Net” with Ty Dolla Sign.

In addition to her chart success, Grande has also released a Netflix documentary this year. The Netflix special is called “Ariana Grande: Excuse Me, I love You” and follows Grande on her Sweetener tour in 2019. This provides fans with backstage footage of her sold-out tour that took her around the world between March and December 2019. The Netflix synopsis for the 1 hour 37 minute program reads “Ariana Grande takes the stage in London for her Sweetener World Tour and shares a behind-the-scenes look at her life in rehearsal and on the road”.

Grande is no stranger to chart success, with the majority of her six studio albums reaching the Number One spot and many of her singles doing the same. Grande’s first album was “Yours Truly” released in 2013, with successive albums including “Dangerous Woman” in 2016 and “Sweetner” in 2018. Some of Grande’s most successful singles include “Break Free” in 2014, featuring Zedd, “God is a Woman” in 2018, “One Last Time” in 2014 and “Rain on Me” with Lady Gaga, released in 2020 and she has won a whole host of awards over her career so far.

This positive news provides some light at the end of a difficult year and we’re wishing happiness to Ariana Grande and Dalton Gomez.