Blog - Latest News
You are here: Home1 / News2 / Lifestyle News3 / As Biking Becomes The New Lifestyle Trend Will It Stick Beyond Coronav... 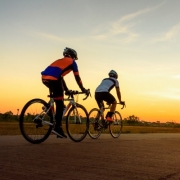 For the past few years I have been saying that I want to bike to work. Just saying it, not actually doing anything about it. It’s not far, a couple of miles, pretty straight, except for a huge hill at the end. I’m not very good at buying things for myself, call it guilt, call it indecisiveness. Who knows the real reason. I can quite easily spend money when buying for other members of my family, I’ve always loved buying things for other people, but for some strange reason, it has taken a worldwide pandemic to push me to buy something I had wanted for years.

Working in a school meant that we did not close when most of the world did. If you believe the media hype, you will have heard of deserted playgrounds and empty classrooms. Whilst to some extent this was true, there were children that have continued to go to school every day since lock down began. For safety reasons, the staff were put on a rota system, meaning that we were not needed on site every day. This, coupled with the delightful weather, gave opportunity for a longtime idea to take fruition. Ridiculously it felt reckless and decisive as I ordered my bike online, much like the 1.3 million Brits who also bought a bike during lockdown. I wasn’t fussy, I didn’t want an expensive one. I didn’t want one with all the whistles and bells. I just needed a good bike that got me from A to B. I was determined.

It turns out, I wasn’t the only one with this idea. Can you actually believe there was a shortage of bikes as it became the one of the most in-demand items of the lockdown? Trying to buy a bike early lock down and to be fair even now, requires quick decision making and the right timing. I already knew that I would buy a new bike this time, I had decided that quite quickly. In doing so, it brought back many childhood memories as I realized I had never had a new bike. We had been a household of second hand goods. Not shamefully, that was just how we lived in a family of 6.

After several unsuccessful attempts, I finally found one in stock that I could collect the following week. I don’t remember the last time I had felt so excited about a purchase. I mean, a new hoover or a new kettle are quite exciting, but this was different. This was for a thrilling new venture. I had a purpose and I was determined that I was going to make this happen.

The day of collection arrived. I got a lift to the shop but I had asked to be left to collect it so that I could ride it home. My bag was packed with my daughter’s old helmet and a bottle of water and I stood in a very hot and long outside line (2 metres apart of course) for nearly an hour awaiting collection. It did not disappoint, 3 months on and I am still biking to and from work every day. We have been extremely lucky with the weather but it got me thinking about my commitment to this new mode of transport and whether I would be a fair weather rider. This in turn made me wonder what other changes people might have made during lock down and if they intended to stick to them as we ease out of it.

I bumped into a friend of mine earlier in the week and my chin almost hit the floor, she had started Slimming World at the beginning of lock down, she looked like a completely different person. Two and a half stone lighter, I was so impressed. It was a very inspiring moment, although I also felt extremely guilty for the amount of rubbish food and alcohol I had consumed during the majority of my time at home! I think I was also a bit jealous because I felt like she’d used her lock down time more wisely than me. Many others have been following her path and shedding the pounds during lockdown, and I wonder how many of us are having the same feelings over other peoples experiences?

More recently I’ve heard friends and colleagues talking about how they are going to say no to more. No to going out if they actually don’t want to go but feel they should. Being in lock down has made them realise they were going out because everyone else wanted them too, not necessarily because they wanted to. In comparison, many have commented on the fact they hadn’t realised how antisocial they actually were until not much changed for them during their time at home. How missing friends and family has made them want to make more of an effort once the chance arose.

There is a lot to be said for the realization and fulfillment of these new plans or projects and I am sure we are not alone in even the smallest of changes we have made. The question now is, will these ideas and new ways of living stick with us? Will the return of a faster pace of life see us once again losing sight of the important parts that make us who we are? I hope not.

For now I shall leave you with this thought. Wow, an incline. Let’s just say that there are roads that I had never realized had even the slightest incline. Roads I have walked so many times and not appreciated their straightness or their bumpiness. Buy a bike and you’ll see what I mean.

I’m a biker now you see, I don’t have all the gear yet but I think as the weather turns there will definitely be some guilt free purchases of a raincoat and goggles.

Oh and before lock down, I didn’t write either. I always wanted to, since my University days. Just life hadn’t taken me in that direction. It has now…and I kinda like it.

Apocalypse Movie Fans Are Better Equipped To Cope With The Covid-19 Pandemi...
Scroll to top