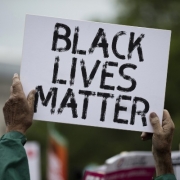 On the 23rd of August, a young black man, Jacob Blake, 29, was shot several times in the back by the police as he walked to his car where his three children were seated. In response to yet another horrendous act of police brutality, a wave of protests that began in Kenosha, Wisconsin has moved to other US cities including Portland and Minneapolis. Issues of racism, police brutality and systemic racism have been very real and very important topics for a long time. However, after the murder of George Floyd in May this year, the ensuing protests lit the world on fire – local protests quickly went global and conversations about worldwide racism were brought to the forefront of public discussion. The recent shooting of Jacob Blake, who has survived but is paralyzed from the waist down, has led to further protests including boycotts within sports organisations such as the NFL and NBA.

After the shooting of Jacob Blake, the Milwaukee Bucks boycotted their play-off game against Orlando Magic, prompting other athletes across the country to stand in solidarity and protest as well. In a statement, Bucks guard Sterling Brown, said: ‘the past four months have shed a light on the ongoing racial injustices facing our African American community… despite the overwhelming plea for change, there have been no actions, so our focus cannot be on basketball.”

Soon after the  decided not to play the NBA announced that it was going to postpone Game 5 of three different play-off series. These included, Bucks vs. Orlando Magic, Houston Rockets vs. Oklahoma City Thunder and Los Angeles Lakers vs. Portland Trail Blazers. Further, the WNBA postponed games in protest and several Major League Soccer (MLS) teams and Major League Baseball (MLB) teams said they would also strike in solidarity.

Writing on Twitter, former President Barack Obama wrote; ‘I commend the players on the @Bucks for standing up for what they believe in, coaches like @DocRivers, and the @NBA and @WNBA for setting an example. It’s going to take all our institutions to stand up for our values.’

Teams in the NFL have also joined the protest, the associated press reported that prominent teams such as the Green Bay Packers, Chicago Bears, Denver Broncos, Indianapolis Colts, Arizona Cardinals, New York Jets, Tennessee Titans and the Washington Football Team boycotted practice in response to the shooting. According to ESPN a spokesperson from the Chicago Bears said in a statement, “In the wake of what has taken place in our backyard of Kenosha over the last couple of days, we as a team have a lot on our mind today, we decided to pause our football activities to voice to each other, our coaches and our staff where we stand on the real issues around race and police brutality in our country… We all agreed that talks and discussions are simply not enough anymore and we need action. We are putting in plans to take action in our communities and together we believe we can make a real difference. We need action not only today, but in the days to come.”

On Twitter, the Indianapolis Colts marked their boycott with the statement, “the Colts will not practice today. Instead, the team will use the day to discuss and work towards making a lasting social impact and inspiring change in our communities.’

The NFL and NFL players Association later released a joint statement addressing the shooting of Jacob Blake and the players protests, stating, ‘“While our passions continue to run high, we are proud that our players and clubs, league and union, are taking time to have the difficult conversations about these issues that affect the Black community and other communities of color in America… we are especially encouraged that these conversations are about how we can come together to make the necessary and long overdue changes in our country.” The NFL has previously been criticized due to its treatment of Colin Kaepernick after he protested police brutality in 2016, after the murder of George Floyd, the NFL issued a statement which highlighted both the need for change within the league and noting the power its platform has for addressing injustice.

Since the shooting, several athletes, sports teams, and associations are standing in solidarity with protests against racism and police brutality. As the boycott inspires others, more and more athletes are joining the protest from large to small teams, from soccer to tennis. Sport is woven into the very fabric of American society and using such platforms to highlight injustice and protest for change has proven time and time again to be powerful and effective.

How Has The UK Housing Market Been Affected By The Recession So Far?
Scroll to top