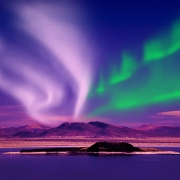 Some of us have seen it, most of us would like to see it. Whatever your stance, the Aurora Borealis is one of the most beautiful natural marvels in the world. Whilst scientists and researchers study the phenomenon, it also plays muse to photographers, artists, travellers and writers alike, many taking pilgrimages to just see the lights. So, it seems fitting that as Phillip Pullman’s successful series, His Dark Materials, which heavily features the Aurora, gets another adaptation and several new books, the Northern Lights decide to switch up their style.

What is the Aurora?
Credit is given to Galileo who was said to have coined the term aurora borealis in 1619. Named after the Roman Goddess of the morning, Aurora, who was the equivalent of the Greek goddess Eos who brought in the dawn. The Aurora has been around for centuries, the earliest depiction was captured in the Cro-Magnon cave-paintings entitled “macaronis”, and created around 30,000 BC. Since it has influenced art, myths, religion and driven science, with multiple theories on how the lights form. Now, we understand that the Aurora is caused by charged particles emitted from solar flares from the sun that enter the magnetic atmosphere and collide with molecules such as oxygen and nitrogen. The results of which produce millions of photons that, much like a neon light, collectively create the Aurora. Interestingly, we know the Northern lights to be the Aurora Borealis, which naturally sit in the northern hemisphere, but the southern hemisphere has their own, lesser known, ‘Southern Lights’ too, titled the Aurora Australis.

What has been discovered?
The thrilling discovery was privy to several amateur stargazers and photographers in Finland. When sharing their photographs on a collaborative online group, unusual and unfamiliar patterns in the Auroras were revealed. Minna Palmroth a space physicist from the University of Helsinki, was invited to join the discussion. After further investigation it was confirmed that the new movements of the Borealis was indeed an exciting new discovery.

The Aurora normally takes on predicable recognisable shapes depending on conditions. Typically, these are the green ribbon-like patterns, beautifully rippled across the sky, that we all have come to know. However, the photographs show the aurora taking form in additional sand dune like arrangements which have thus been dubbed ‘the dunes’.

These new formations are particularly exciting for scientists as it could indicate and reveal previously unknown or indefinite workings of the atmosphere which are notoriously hard to measure efficiently. The ‘dunes’ have been estimated to form at an altitude of 100 feet sitting below the Aurora Borealis within the ionosphere (a layer of the earth’s atmosphere that is affected by solar and cosmic radiation) and situated in the in the upper parts of the mesosphere. Which, in layman terms, is just above our breathable atmosphere.

One of the most difficult areas to observe and define is the interaction between our neutral atmosphere and the electromagnetic ionosphere, which is situated approximately between 80-120 feet. As it is so hard to observe these atmospheric workings, this section has sardonically been named the ‘ignorosphere’ by scientists. Luckily enough however, the dunes are believed to sit within this problematic section at 100 feet and could lead to a greater understanding of the interactions of the atmosphere. In an article for IFLScience Palmroth stated:

“This could mean that the energy transmitted from space to the ionosphere may be linked with the creation of the inversion layer in the mesosphere,” said Palmroth. “In terms of physics, this would be an astounding discovery, as it would represent a new and previously unobserved mechanism of interaction between the ionosphere and the atmosphere.”

How to see them
Iceland, Alaska, Canada, Northern Sweden, Finland and Greenland are all notable destinations to see the lights and all have their own ideal places and best times of year to catch them. Although the Northern Lights have been spotted in lower countries such as Scotland and England, it is quite rare to observe them there but still may be worth a quick check of the skies during the right conditions. In the Southern Hemisphere, New Zealand and Tasmania can also boast stunning views (of the Aurora Australis).

It is nearly impossible to predict when you will be able to see the Northern lights. Many travel destinations and specialised Northern Light tours underlining that they cannot guarantee that you will see them. Their unpredictability adds to their rare charm but can be frustrating for those, when standing outside in the freezing cold staring at the sky for hours.

It goes without saying that the best time to catch the lights is at night, but like stargazing, a number of conditions such as clouds can affect your ability to view them. One of the main culprits is light pollution, so travel to a safe place that is free from man-made light and as dark as possible. Sometimes, the longer nights of winter months may provide a higher probability of seeing the Borealis but check when the best time to see the lights is in your chosen destination before booking your trip, as each country is different.