Blog - Latest News
You are here: Home1 / News2 / Travel News3 / Australian Campaigns to Get Tourists Back After BushFires 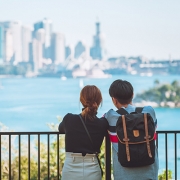 The on going bushfires in Australia has seen a dramatic effect on it’s tourism industry with many travelers opting to cancel their plans to the country, and few new bookings being made.

In response the Australian government has announced a $52 million (A$76 million) ‘tourism recovery package’ in an attempt to encourage tourists to head back to the continent that we all love to explore.

At the beginning of the year Tourism Australia had announced that international tourism had not seen any effects from the fires. However, a recent statement from the Australian Tourism Export Council contradicts this and shares details of a survey they had conducted with its inbound tourism members – including inbound tour operators and individual tourism businesses – that clearly show major losses due to cancellations.

Over half of all bookings from the United States are between December and the end of February, when most travelers want to experience the Australian summer. But with the heat comes the fires and with the bushfires peaking earlier than usual – and covering a far greater area – families have chosen to stay away.

The council’s managing director Peter Shelley confirmed that “international visitors are canceling because of fears around air quality, safety and the impact fires have had on our tourism offering as well as a lack of certainty on how long it will take for us to recover, so the sooner we can communicate a strong, positive message, the better”.

The Australian government released a statement regarding the recovery package with Prime Minister Scott Morrison stating, “Australian tourism is facing its biggest challenge in living memory”.

The main focus of the fund is the pressing need of encouraging tourists to visit the country and ensure that local economies, jobs and small businesses are protected.

Further on in the statement Simon Birmingham, the Minister for Trade, Tourism and Investment, said:

“We will break from the practice of Tourism Australia exclusively focusing on international visitors and urgently kick off a local campaign because Australians are best placed to immediately understand that most of our country remains as safe to visit as ever.

“Our international marketing campaign and extensive hosting of international media or travel trade partners will demonstrate to the world that Australia is very much open for business, that we maintain incredible tourism experiences in every state and territory and explain the regeneration that the Australian bush goes through after bushfires.”

It is believed that around $14 million (A$20 million) of the funding will be dedicated to producing a domestic tourism marketing campaign. Many Australians have voiced the need to contribute to their own economy and the campaign is hoping to link into this mind set and encourage ‘staycations’, supporting the areas that are most affected.

A further $17 million (A$25.3 million) will be used in an international marketing campaign, making sure the world knows Australia is a safe place to visit and is still ‘open for business’. The campaign will work alongside international travel providers and partners to replace the lost bookings and generate revenue. In fact there has already been campaigns released featuring Australian stars including Kylie Minogue and Chris Hemsworth.

The remaining budget will go towards new attractions at areas that have been affected by the fires, including tourist walks, art installations, concerts and festivals. They will also be offering grants of up to $688,500 (A$1 million) per project in an act of support to projects in the areas most affected.

“My message to anyone thinking about a holiday — from here or overseas — is that Australia’s towns and our incredible parks and beaches are open for business and they need your help.”

With many of Australia’s international markets starting to close in February it is imperative that the recovery package kicks in soon with Shelley admitting that it is critical to be engaging with these markets in the short term.

“Our united strategy needs to be strong and nuanced, clearly defined, well-resourced and expertly executed in order to balance the swirling negative perceptions of Australia which have come off the back of the bushfires.”

The South Australian Tourism Commission has already launched their campaign using the slogan “Help them out, #BookThemOut” in an attempt to increase tourists to Kangaroo Island and the Adelaide Hills – both of which have seen vast damage from the fires.

Rodney Harrex, the commission’s CEO agrees that tourism is the key to getting Australia back on track, stating:

“Tourists can play a big part in helping these regions get back on their feet by sharing their experiences on social networks.”

February Is The Most Popular Month For Smartphone Launches