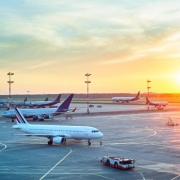 The current coronavirus pandemic has seen the majority of the world’s borders close to all but essential travel, with many citizens worldwide living under their country’s lockdown orders at some point over the last six months, so it is understandable that there are many who are eager to visit anywhere other than their hometown.

However, as countries and states across America reopen, it is clear that the number of people happy to get back on a flight so soon after a virus that has killed nearly half a million people worldwide, is not going to be as high as it once was.

Businesses throughout the travel and tourism industry have been steadily putting into place regulations that will allow them to reopen while hopefully minimizing the risks to their customers. And Raleigh-Durham International Airport (RDU) in North Carolina is no different.

Although they acknowledge the number of passengers willing to fly will be reduced, they predict that numbers will take some time to increase, with passenger levels still being around 20% lower at the end of 2024 than they were before Covid-19 took over the world.

With this prediction it is clear to see why RDU have pressed pause on their expansion projects that they had started work on to cope with the higher numbers of travelers. Only six months ago RDU were putting plans in place for a new rental car facility, to add extra gates at both of their terminals as well as increasing the customs area in Terminal 2, but these plans are not expected to continue for some time.

In a move familiar with other airports around the world, RDU are having to focus their reduced revenue working on what is already there – as well as implementing safety measures to keep the spread of coronavirus at their terminals reduced.

Chief operating officer at RDU Bill Sandifer confirms this is the case and that the majority of the plans will focus on rebuilding runways, aprons and taxiways saying, “The pressure around growth has really relaxed. That has given us an opportunity to focus on really the heart of our infrastructure to continue to make sure we’re making the investment where we need to make it.”

The airline industry has been one of the most hit thanks to coronavirus, with many airlines seeking financial support, laying off staff and some even facing closure. RDU confirmed that the numbers of travelers passing through the airport had reduced by over 96% with the airport having only 40,000 passengers in April – the same number as one day before the virus struck.

However Michael Landguth, the airport’s president, confirmed that numbers are increasing with around 98,000 passengers passing through RDU during May. These figures mean the capacity of seats occupied increased from 12.1% in April to 37.4% in May, however the numbers were still a huge decrease from 2019, by around 92.5%.

Landguth confirmed, “RDU’s passenger levels are consistent with airports in other markets, where passenger traffic is also growing incrementally”.

Airlines across America saw a decrease of 96% for April with only 3 million passengers opting to travel by plane, 2.8 million of which were domestic passengers. This is a stark contrast to April 2019, which saw 76.1 million with some saying the figures had not been as low since 1974 when government records began.

With such a significant drop in figures it is no surprise that other airport businesses struggled to survive as the drop in passengers resulted in food and beverage, duty free and keepsake items, parking and rental cars earning far less income than previous months.

RDU’s controller Ronald Kapocius confirmed this was also the case at his airport with the announcement that operating revenue is expected to be $65.4 million, around 63% less than predicted. This drop in income has obviously forced management to look at their spending, with overall expenditure already cut by 45% in an attempt to survive.

With passenger numbers starting to increase airlines as well as airports have started implementing measures to ensure the safety of both travelers and staff. United Airlines passengers will be expected to fill in a health self-assessment when they check in with part of the questionnaire asking passengers if they have had any covid-19 symptoms in the previous 14 days. The check-in counters will have sneeze guards and there will be touchless kiosks for baggage check-ins.

Passengers will also have to agree to wear a facemask before they are allowed to enter the plane.

Jet Blue has promised to block the middle seat on all airbus planes unless passengers are traveling together. Smaller planes will see the aisle seat closed.

United has recently agreed a new partnership with Clorox Co to ensure high standards of cleaning on all their fleet.

Both American Airlines and Alaskan Airlines have confirmed they have stepped up their cleaning to ensure minimal spread of the virus.