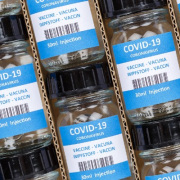 President Biden said this week that he expects the US to soon be able to vaccinate 1.5 million people a day, an increase of 500,000 on his target of 1 million per day in his first 100 days in office. Speaking at a Covid-19 press conference, Biden said that the initial target could be surpassed within three weeks.

Biden pointed out that the key factors in increasing vaccination distribution efforts included having enough of the vaccine, having enough syringes and other necessary equipment and not having enough people to administer the jab. The 78-year-old said his administration was already working to produce more vaccinators.

“I’d like to update you on the aggressive steps we’re taking to meet our goal of administering 100 million COVID-19 vaccine shots within 100 days, and to ramp up the vaccine supply as fast as we can,” President Biden said at the press conference.

“This’ll be one of the most difficult operational challenges we’ve ever undertaken as a nation. I’ve said that before, but I must say it again because we’re going to do everything we can to get it done. But a lot of things can go wrong along the way.”

On day seven of his presidency, Biden announced an increase in overall weekly vaccination distributions of states, tribes and territories from 8.6 million doses to a minimum of 10 million doses. The change comes into effect from next week and signals an increase of 1.4 million doses every seven days.

Biden also vowed to ensure states and territories will always have a reliable three week forecast on the forthcoming supply, giving governors and community leaders greater certainty to ensure plans can be carried out efficiently.

“And so as I’ve said in the past, we want to give credit to everyone involved in this vaccine effort and the prior administration and the science community and the medical sphere for getting the program off the ground, and that credit is absolutely due,” Biden continued.

“But it’s also no secret that we have recently discovered, in the final days of the transition… And it wasn’t until the final days that we got the kind of cooperation we needed, that once we arrived the vaccine program is in a worse shape than we anticipated or expected.”

During the conference, Biden said that there will be work carried out across the government with private industry in order to ramp up production of vaccine doses and protective equipment. He announced that his administration had already identified suppliers and were working with them on a plan forward.

Biden asserted that he hopes the problem at the end of the summer is that there is too much vaccine or equipment leftover, rather than the story being of interruptions in supply or access.

A White House official told CNN that the administration still views the 100 million vaccines in 100 days as ‘ambitious but achievable’. The official stressed that the hope was to surpass that original goal, but staff anticipated that plenty of things could yet go wrong given the circumstances around the pandemic.

After describing Biden as an ‘optimist’, the White House official also said that the president had been consistently pushing his Covid team to try and aim for their progress to go beyond their initial goal of 100 million doses in 100 days.

“A lot of you follow this and the press is the smartest group of people in town, I mean that sincerely. You hone this stuff down clearly. I think you found the same thing. Even before I took office, I announced a new vaccination strategy which centers on federal leadership and execution for our whole country,” Biden said.

“Jeff had a meeting with the governors on Zoom and others and I think we’re getting this coordinated in a way that there’s increased cooperation and confidence. But until now we’ve had to guess how much vaccine to expect for the next week, and that’s what the governors had to do. “How much am I getting next week?” This is unacceptable. Lives are at stake here.

“We’ve directed FEMA, the Federal Emergency Management Agency, to stand up the first federally supported community vaccination centers and that work is underway. We’re working to make vaccines available to thousands of local pharmacies beginning in early February, it’s a couple of weeks off. And that will enormously expand our reach.”