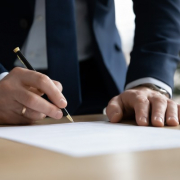 President Joe Biden, the 46th President of the United States of America, officially came into office on the 20th of January 2021 and wasted no time after his inauguration to begin implementing change, or as some outlets would write ‘reversing Trumps policies’. This included several key executive orders that focused on the COVID-19 pandemic and climate change amongst more.

In less than 24 hours Biden signed 15 executive orders and two executive actions – in comparison to his predecessors, Trump, Obama, GW Bush and Clinton signed 8, 9, 2 and 3 respectively in two weeks. The BBC reported:

‘”There is no time to waste when it comes to tackling the crises we face,” President Biden tweeted as he headed to the White House following his inauguration. President Biden “will take action – not just to reverse the gravest damages of the Trump administration – but also to start moving our country forward,” a statement detailing his executive orders said.’

On Climate Change
True to his campaign promises on making climate change a top priority, Joe Biden wasted no time in re-joining the Paris climate agreement which was originally signed by Obama. The Paris Climate Agreement under the United Nations, is an international treaty which aims to limit global warming to below 2 degrees Celsius (preferably below 1.5 degrees). It requires countries under the agreement to undertake increasingly ambitious climate action over five year cycles to achieve this. Former President Trump removed the United States from the agreement, which came into effect last year.

On the re-joining of the Paris Agreement, Biden’s Climate Envoy John Kerry, tweeted ‘Today, @POTUS rejoined the Paris Climate Agreement, restoring America’s credibility and commitment — setting a floor, not a ceiling, for our climate leadership. Working together, the world must and will raise ambition. It’s time to get to work – the road to Glasgow begins here.’

Biden also revoked the presidential permit granted to the Keystone XL Pipeline. A pipeline that would carry oil approximately 1,900 km from Alberta, the Canadian Province to Nebraska, carrying over 830,000 barrels of oil a day, and join an existing pipeline. Native American groups and environmentalists fought the project for over a decade. Who argue against it for its damage to wildlife, the destruction of their habitats and the toxic environmental impact of pipeline spills (not to mention the investment in fossil fuels which create greenhouse gasses). In addition to the environmental impact, Native American’s have also argued against it as the pipeline would pass through sacred sites and violate historical treaty boundaries on land impacting Native American tribes in a number of ways.

Biden has apparently also instigated the review of all executive actions that were “damaging to the environment, [or] unsupported by the best available science”. He also ordered federal agencies to ‘to review equity in their existing policies and come up with a plan in 200 days to address inequality in them,’ the Guardian reported.

On COVID-19
According to the New York Times, ‘Mr. Biden is requiring social distancing and the wearing of masks on all federal property and by all federal employees. He is also starting a “100 days masking challenge” urging all Americans to wear masks and state and local officials to implement public measures to prevent the spread of the coronavirus.’

The administration has also revealed a seven-point plan to address the COVID-19 pandemic. The introduction of the plan said: “The American people deserve an urgent, robust, and professional response to the growing public health and economic crisis caused by the coronavirus (COVID-19) outbreak. President Biden believes that the federal government must act swiftly and aggressively to help protect and support our families, small businesses, first responders, and caregivers essential to help us face this challenge, those who are most vulnerable to health and economic impacts, and our broader communities – not to blame others or bail out corporations.”

The seven aims of the plan include: Ensuring all Americans have access to regular, reliable and free testing by increasing test sites and investing in home tests and so forth. Fix PPE problems. Provide clear, consistent evidence-based guidance for communities including social distancing guidance and providing schools with packages to adapt to COVID-19 . Protecting those who are most vulnerable, and the equitable and effective distribution of treatments and vaccines.

The BBC also reported: ‘In a further break with the previous administration, Mr. Biden’s chief medical adviser, Dr Anthony Fauci, said the US would join the Covax scheme designed to deliver Covid vaccines to poor countries.’

In a statement, Wade Henderson, CEO of the Leadership Conference on Civil and Human Rights, said: “These executive actions will make an immediate impact in the lives of so many people in desperate need of help. Reversing Trump’s deeply discriminatory Muslim ban, addressing the Covid-19 crisis, preventing evictions and foreclosures, and advancing equity and support for communities of color and other underserved communities are significant early actions that represent an important first step in charting a new direction for our country.”

Danny Boyle To Direct Series Based Upon The Memories of Sex Pistols Guitari...

CDC Director Admits The US Doesn’t ‘Have Enough Vaccines’ To Keep Up With...
Scroll to top