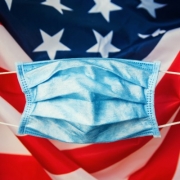 Last week saw Trump mock Democratic presidential nominee Joe Biden for wearing a mask, despite the fact that he is the president of the country with the most coronavirus cases in the world.

During a speech to his followers, largely without masks, in Pennsylvania, Trump asked if they had ever seen ‘a man that likes a mask’ as much as Biden does.

“It gives him a feeling of security,” President Trump said at the rally. “If I was a psychiatrist, I’d say this guy has some big issues.”

Trump was outwardly against the use of masks and face coverings until July and ever since has advocated their use with varying levels of enthusiasm. The president seems to have used them to regain popularity when it was falling at the height of the pandemic, but also as a weapon against Democratic rivals.

Health experts’ advice on the matter has been consistent: wear a mask in public in order to reduce the risk of transmitting the disease to others and reduce case and death numbers.

“This macho stuff, for a guy — I shouldn’t get going, but it just, it costs people’s lives. It’s costing people’s lives,” Biden said in May in response to Trump’s tweet. Trump’s position amounts to “stoking deaths,” he said.

“Presidents are supposed to lead, not engage in folly and be falsely masculine. Look, I mean, talk about a guy who’s missing a step,” he said of Trump. “He’s missing something, man.”

“This is a guy that sits in the Oval Office, throws off his absentee mail-in ballot and sends it to Florida to vote in the primary. Now why is that not something that is susceptible to fraud?” Biden asked.

“There’s no evidence at all” of widespread voter fraud associated with mail-in ballots, the Democratic nominee added.

The US Centers for Disease Control and Prevention officially recommended the use of masks or face coverings in public in April, citing strong evidence that a significant amount of people were spreading the virus without feeling any symptoms themselves.

“They had some interesting polls. I don’t know, do I like it or don’t I like it, I guess I probably do, but they say no matter what it is, there are more votes for Trump because a lot of people say, “Just leave me alone, I’m going to vote the way I want to vote.” And then they go and they vote for Trump,” the president told his North Carolina supporters.

“On your ballots, if you get the unsolicited ballots, send it in and then go make sure it counted, and if it doesn’t tabulate, you vote. You just vote. And then if they tabulate it very late, which they shouldn’t be doing, they’ll see you voted so it won’t count.

So send it in early and then go and vote and if it’s not tabulated, you vote and the vote is going to count. You can’t let them take your vote away. These people are playing dirty politics, dirty politics,” President Trump said, angering the North Carolina Attorney General in process, who later pleaded with NC citizens to vote, but only once.

“So if you have an absentee ballot, or as I call it a solicited ballot, you send it in, but I would check it in any event. I would go and follow it and go vote. And everybody here wants to vote. We vote the old fashioned way,” Trump continued, again highlighting how he believes mail-in voting is susceptible to widespread voter fraud, despite there being no evidence to support this claim.

“It’s been a mess. They don’t know where they are, they don’t know who they’re sending them to. It’s a terrible thing. Follow your ballot and vote. That’s very important, I think everybody understands,” he added.

If a person votes by mail and then attempts to vote again in person, they will be turned away as their name will be present on the electronic poll book. People found to be doing so intentionally face prosecution as it is against the law.

Where Can Americans Travel Internationally?

Hand Care in The Year of Handwashing
Scroll to top