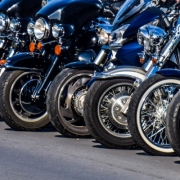 The Sturgis Motorcycle Rally, a 10-day biker rally held in South Dakota, was responsible for more than 250,000 new cases of coronavirus that would have cost $12.2 billion in treatment, per a San Diego State University study.

With almost half a million visitors over 10 days during the beginning of August, the stark increase in cases caused by the event represents approximately one in five of the 1.4 million new Covid-19 US cases between August 2 and September 2.

The large crowds were mostly made up of those unwilling to wear masks and face coverings or adhere to social distancing guidelines.

This made it recognizable as a coronavirus hotbed to onlooking scientists and San Diego University workers decided to trace and track the numbers of what they saw a potential ‘superspreader’ event.

The University’s research used data from mobile phones in order to track pedestrian activity at restaurants and bars, shops, entertainment venues, hotels and campgrounds during the rally.

This data was used in conjunction with the Centers for Disease Control and Prevention’s statistics, which recorded infection rates from where the rally took place (Meade County), as well as neighboring districts and the areas across the country from which the most number of rally-attendees had traveled from.

It was concluded by the authors that the ten-day event was linked to 263,708 cases across the US and that the data provided “strong evidence that the Sturgis Rally appears to have been a super spreader event for COVID-19.”

“If we conservatively assume that all of these cases were non-fatal, then these cases represent a cost of over $12.2bn, based on the statistical cost of a COVID-19 case of $46,000 estimated by Kniesner and Sullivan (2020),” the authors continued.

The Sturgis Motorcycle Rally has been held in South Dakota every year since its inception in 1938, apart from during the Second World War when petrol rationing meant it had to be canceled. Bringing in millions of dollars in income for the local area, the event typically features live music, this year included Smash Mouth and Drowning Pool, bike races and stunts.

“We’ve experienced the smallest contraction of any Western nation, meaning we’ve been affected less than any other nation, Western nation, and probably almost, I think you can put us in … I just saw some numbers. I think you can put us into just about any category anywhere, and the fastest recovery by far, and that’s anywhere. Nobody’s recovered like we’re recovering,” President Donald Trump said during his latest White House press conference.

“If we follow Joe Biden’s strategy, we’d shut down the entire country after just having set records on growth. We also did have tremendous retail growth, as you’ve probably noticed. We’re witnessing the fastest labor market recovery from an economic crisis in our history. By contrast, the Obama/Biden administration had the slowest weakest and worst recovery in American history, as you know.

“We continue to make progress in our fight against the China virus. New weekly cases have declined by 44% since July. Deaths declined by 20% compared to just last week, it’s going down very rapidly, really rapidly. This is in contrast to nations in the European Union, which have recently experienced a sharp increase in cases. They’re having a very big spike over there where we’re hopefully beyond our spike and we’ll see, but we’re doing very well all over our country.

“In the past five weeks, per capita cases doubled in France, surged to over 300% in Spain, which I’ve been hearing about and speaking to some of the leaders of Spain and they were having a hard time, and increased more than 400% in Italy, again,” the president continued.

“And as you remember, I put a ban on people coming in from Europe, after the ban I imposed on China, Wuhan because of Wuhan, primarily, because that area was very infected. We also put a ban on Europe.

“I’m very proud of everybody that worked on this, and I really do believe we’re rounding the corner and the vaccines are right there.

“But not even discussing vaccines and not discussing therapeutics, we’re rounding the corner. We already have therapeutics out there
by the way, which are having, obviously, a very big impact because you look at the way people are recovering, it’s so much better than in the past. Before we knew about the disease and had anything to fight the disease.”

Be More Danish, Be More Hygge