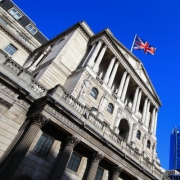 The economies of the world have continued to struggle following the closure of many of their businesses and educational facilities in an attempt to stop the spread of Covid-19, and the United Kingdom is no exception.

Already struggling to recover from their first lockdown, which saw businesses temporarily close – although many never re-opened, staff furloughed and many more losing their jobs, the thought of a second lockdown was something they were understandably adverse to.

However the British government has placed the country into a second lockdown which will last four weeks, ending on December 2, although some politicians have predicted this deadline could still be extended.

The effect of a second lockdown will be a massive blow for the UK’s economy, especially in the run up to the festive season, and has resulted in the Bank of England (BoE) announcing that they will be providing a cash stimulus of £150 billion (nearly $200 billion) in an attempt to stave off a deeper recession caused by the pandemic.

On top of the stimulus, the BoE have maintained the country’s interest rate at 0.1 per cent, a figure that is the lowest on record. Both the moves are designed to help an economy that has been predicted to shrink 11 percent, a figure that is higher than the 9.5 per cent contraction that was previously forecast.

There was some hope that there would be a rebound of 7.25 per cent for output however even that glimmer of hope is not quite the earlier prediction of 9.0 per cent growth.

The British Chancellor of the Exchequer Rishi Sunak has continued to find ways to help the economy including a fresh support scheme for those who have seen their livelihood or businesses affected. This does include an extension of the furlough scheme that could see employees receive up to 80 per cent of their income.

The self-employed are also struggling with an announcement that, once you take away the spin, entitles them to around 55 per cent of their average income for the next three months.

Speaking of his support package Sunak said, “The bank’s forecasts… show economic activity is supported by our substantial fiscal and monetary policy action’.

And in a speech to other politicians in parliament, Sunak said, “as the Bank of England has said, the economic recovery has slowed and the economic risks are skewed to the downside.”

Sunak continued, “Given this significant uncertainty, the worsening economic backdrop and the need to give people and businesses security through the winter, I believe it is right to go further.”

In response to accusations from the Labor Party – the UK’s main opposition – that the current government had not reacted quickly enough to support struggling businesses Sunak reminded Sir Keir Starmer, the Labor leader, that in fact, the government had delivered £200 billion (around $262 billion) in fiscal support since the first lockdown in March, saying “it’s not a weakness to be agile and fast-moving but rather a strength, and that will not change.”

Yet many people across the UK, including politicians in Prime Minister Boris Johnson’s own party, are questioning why there has been a lockdown imposed as numbers of confirmed cases of coronavirus were dropping. And with the previous lockdown, which lasted for three months, plunging the UK into their deepest recession ever, simply ‘following what other countries around Europe are doing’ seems a damaging move.

The move has left the BoE announcing, “The outlook for the economy remains unusually uncertain.”

The announcement continued that the outlook “depends on the evolution of the pandemic and measures taken to protect public health, as well as the nature of, and transition to, the new trading arrangements between the European Union and the United Kingdom” following the UK’s departure from the EU.

Furthermore, the outlook “also depends on the responses of households, businesses and financial markets to these developments”.

In a conference call to the country’s reporters, Andrew Bailey – governor of BoE – confirmed that the move was a reaction to the ‘extraordinary’ crisis that continues to wreak havoc across the world.

The bank has now released £450 billion ($591 billion) of fresh quantitative easing (QE) throughout the pandemic and is on top of the hundreds of billions of pounds that they have already released over the last ten years thanks to several reasons including a global financial crisis as well as Brexit.

The QE will see the BoE acquire assets including corporate bonds as well as government bonds in an attempt to increase investment and lending, which in turn should stimulate activity in the economy, helping those that need it the most.

UK Enters into a Second Nationwide Lockdown
Scroll to top