Blog - Latest News
You are here: Home1 / Around The Web2 / Culture3 / Burning Man’s Spectacular Art on Display at Oakland Museum 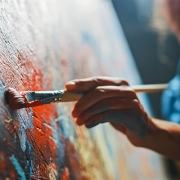 Inside the largest gallery at the Oakland Museum of California, fleeting desert mirages have been captured and held in stasis for all to see — without the pesky dust storms and sunburn that are usually involved with Burning Man.

Here, in a climate-controlled museum environment, a massive, fringed, gold-leaf-trimmed arch — made of mere paper and printed with faces, cats, giraffes and eyes — soars to the ceiling. Tiny peepholes in its legs lead to inner worlds of spiders, dolls and whatever the heck those things are in there. Steps away, a converted bus becomes a rolling, open-air movie theater complete with marquee, large screen playing old-timey flicks, a platform of seats and even a lobby with a vintage candy counter. Nearby, giant mushrooms loom and morph in color and shape before your eyes — no magic fungi needed, unless you’re into that sort of thing.

This is “No Spectators: The Art of Burning Man,” a playful exhibition of touchable, climbable, even huggable creations that usually only appear at the annual spectacle of maker machinations in the Nevada desert, destined to disappear into the ether. Even here, they’ll only be on view through Feb. 16.

“The idea was to share a taste of the creativity and radical self-expression that happens at Burning Man, especially with so many of the artists and makers who come from right here in the Bay Area, ” says Lori Fogarty, OMCA’s director, who is now a burner herself. She went to the festival for the first time last year — for research, of course.

“But even beyond that local connection, the principles of Burning Man — like inclusion, participation, civic responsibility — resonated with our ideals here at the museum,” Fogarty says. “We’d thought about doing a Burning Man show for a long time, then we heard about this great show from the Smithsonian and wanted to bring it here.”

Yes, the Smithsonian. The same venerable national museum known for treasured relics like Lincoln’s stove-pipe hat and Dorothy’s ruby slippers, originated the exhibition in its Renwick Gallery, thanks to lead curator Nora Atkinson. Oakland marks the show’s West Coast debut and final stop on a national tour.And no matter what you think of Burning Man — which began as a small counterculture gathering at San Francisco’s Baker Beach in 1986 and has swelled into what some consider one of the world’s most influential cultural events and others write off as a gentrified bacchanal — no one can deny the otherworldly, often dreamlike and absolutely awesome art installations, sculptures and mutant vehicles that rise each year in the dust of Nevada’s Black Rock Desert.

Bringing such works into a museum setting was indeed “a heavy lift,” Fogarty says, in more ways than one. While displays of costumes, jewelry and photos are easily managed, most of the art installations are huge and built by teams of art collectives.

Some are actually from the desert playa, such as Mill Valley resident Marco Cochrane’s graceful “Truth is Beauty” steel-mesh sculpture of a nude dancer. Others were commissioned for the Oakland exhibition, such as the 40-foot-tall “Temple of Reunion” by Petaluma sculptor David Best and the Temple Crew. It’s so large, it had to be constructed outside in the museum’s garden courtyard.

Reminiscent of the elaborate, intricate structures Best annually creates at Burning Man, the temple is designed to be a quiet, sacred place of reflection and remembrance. Visitors are encouraged to write on it or tie things to it. On the playa, such a structure would be burned in a cathartic ritual at the end of the festival, sending those messages out to the universe. Can’t quite get away with that at a museum.

“David built a temple for the Renwick as well,” Atkinson says. “And in our historic building, we have to fire retard everything to high heaven. So he came up with the idea to have people write little messages on small blocks of wood to be sent out to Burning Man. We delivered several pallets of them this year and they were burned with his temple on the playa.”

As you enter OMCA’s gallery and view wild costumes like “Thorax: Ambassador of the Insects” by Oregon artist Tyler FuQya, calming tones reverberate from a sound installation of mechanized Indonesian gongs by Aaron Taylor Kuffner. In a far corner of the Grand Hall, a huge kaleidoscope star sparkles against the dark ceiling. From Oakland’s Christopher Schardt, it’s “Nova,” a canopy of programmable LED lights that dance to classical music.

Rachel Sadd, best known in the Oakland arts community as Rachel McCrafty, created an interactive piece for the exhibit called the “Gift-o-Matic,” exploring what it means to give and receive. It’s basically a big gumball machine. On one side of the big glass box, people can make gifts, like little beaded bracelets or even “a good idea shared,” then put the gift in a little plastic ball and insert it into the machine. On the other side, another ball pops out and you receive a little present from someone else.