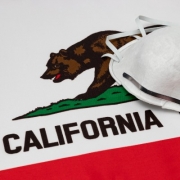 New confirmed cases of Coronavirus have continued to sweep across the country with around 70,000 new cases a day being reported.

And California has confirmed that they have had a further 11,834 positive cases this week, taking their overall number of confirmed infections to 396,501, meaning they are close to becoming the state with the highest number of infections in the United States. Currently New York has had the most infections following its position as the epicenter of known infections when coronavirus first reached America.

California has also seen the number of fatalities increase and is now averaging around 9,100 new infections and just under 100 deaths each day. New York saw over 415,000 cases throughout March and April and has worked tirelessly to bring those numbers down and stem the spread of covid-19. Tactics have included enforcing self-quarantine for any visitors from around 30 states that have high numbers of new cases and seem to have worked with only an average of 725 confirmed cases each day.

Despite heavy criticism and Trump’s insistence that governors look after their own states, coronavirus has continued to spread throughout the country with many states seeing a second wave of infections while some counties are still experiencing the first wave. While some are blaming the Trump administration there is also much anger over the issue of whether you should be forced to wear face coverings.

Florida and Texas have also seen high numbers of confirmed coronavirus cases yet when working on a per-capita basis covid-19 is rampant in the smaller states including Alabama, Arizona, Arkansas, Florida, Georgia, Idaho, Louisiana, Mississippi, Nevada, South Carolina, Tennessee and Texas. However California has reported a per-capita of 161 cases per 100,000 residents.

One piece of good news is that although California is seeing the number of cases closing in on New York numbers, their numbers of deaths are still much lower.

When coronavirus had its grip on New York they were reporting around 10,000 confirmed cases per day, however there were less tests than in California – New York was carrying out around 20,000 tests per day while California are testing nearly 120,000 people each day. New York was also suffering from 1,000 deaths each day, however California’s deaths peaked at 151 in a single day. It could be that our immunities have started to fight back against the virus or it could be the measures put in place to detect the virus early. New York has had 32,000 deaths, with New Jersey (15,000) and Massachusetts (8,500) coming in as the second and third highest states. California has had 7,760 deaths so far.

At the moment Florida has the highest numbers of per-capita case rate with 518 per 1 million daily new cases. However the highest daily death toll is in Arizona who is averaging around 10.7 deaths per 1 million residents per day.

Although Florida has reported more fatalities than California in the last week nine other states have had a higher per-capita death rate, including Alabama, Arizona, Louisiana, Mississippi, Nevada, New Jersey, South Carolina and Texas.

Although the number of cases in Orange County increased to over 1,000 daily cases they have reduced back down to around 675 each day, overtaking Riverside by just three cases.

Riverside has had more cases than any other county for the majority of the pandemic, however San Diego had more back in May. Both counties as well as Los Angeles have had more cases than Orange County while the virus is continuing to spread at a fast rate throughout the area.

There are some Californian states that have not had such high numbers of cases. Kern County, north of LA, has kept their numbers of both cases and deaths down to low figures until this week when an increase of nearly 22 per cent of cases had been reported.

The Bay Area has also reported a new high of daily cases with 1,174 earlier this week, only the fourth time during the pandemic that numbers hit more than 1,000 a day. However the number of deaths has been seen as a success with around 7 per day on average, equating to 0.9 deaths per 1 million daily per-capita rate and 113 daily cases per 1 million residents per capita rate.

Meanwhile the numbers of those hospitalized across the county have continued to stay high with Los Angeles seeing 2,218 patients (at the time of writing). Orange County has had 666, San Bernardino 613 and Riverside has had 507. Both Alameda and Santa Clara have kept their numbers low with 159 and 157 respectively.

Major Motion Pictures See Further Delays Due To Coronavirus Spikes in The U...

Preventing Burnout From Overworking At Home
Scroll to top