Blog - Latest News
You are here: Home1 / Around The Web2 / Travel3 / Camp Out In Retro Style; VW Van Rental Company Opens Its Doors In Hurr... 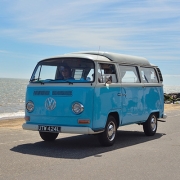 ST. GEORGE — Tapping into the desire to embrace nostalgia and the love for Volkswagen vans, a new business in Hurricane is offering a different way to camp out at any number of Southern Utah’s premier outdoor destinations.

Although retroVWs “official” opening is this week, with business signs going in, the word-of-mouth soft launch has already given owners an indication that the business model could be successful, and they are hoping for a grand opening later this month.

Borrowing from a similar company based in Los Angeles, retroVWs rents vintage Volkswagen vans that have been renovated and converted into the tiny home version of a camper van.

“One of my friends has been renting from the company in Los Angeles every summer for years,” retroVWs co-owner Kevin Kennedy said. “They take a couple of weeks and drive the California coast in a camper bus, so we thought this would work here with Zion being so close.”

Historically, Kennedy added, Zion National Park has discouraged visitors driving larger recreational vehicles and fifth-wheel trailers because of their size and the lack of parking spaces.

“We thought this would be a unique niche where people could park their car at our location on State Street in Hurricane and rent one of our VW busses,” he said.

Although Kennedy said he is adding to his fleet of VWs all the time, his current armada consists of six vans that can accommodate anywhere from just one camper with a hammock and a beanbag to a pop-top van that can sleep up to four.

However, Kennedy advised that currently they only have one automatic drive van, a model that is extremely hard to find.

For the VW community, another one of the most desired and hard-to-find vintage vans is a split-front window version – commonly known as a “splittie” – which the company made from 1950 until the end of its production year in 1967. RetroVWs owns a 1966 splittie.

“The splittie is are getting so valuable, with restored vans selling for $100,000-$200,000,” Kennedy said. “It’s getting to the point we are just looking for the transporter bay vdub vans.”