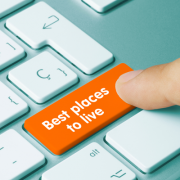 Real Estate company Niche has released their fifth annual report of the Best Places to Live in America, which includes a number of different categories including the most affordable places in the nation to live.

“The pandemic triggered a new set of possibilities—suddenly, many individuals and families found themselves more mobile than ever before, and in the past two years they have continued to think hard about where they really want to live,” says Luke Skurman, CEO and founder of Niche.

Niche creates their reports using data from reliable sources such as the US Census and other government agencies, in addition to citizen reviews and reports. When it comes time to put there report together, they look at factors such as affordability, diversity, local housing economies, and other integral factors that buyers would look at when it comes time to buy a home.

For the second year in a row, Niche reported that The Woodlands is the top place in America to live. Ryan Bell, the principal strategist at Niche, discussed why it’s been able to top the list two years in a row.

“When you look at all the factors we chose for our best cities ranking, The Woodlands is extremely well-rounded. It had high scores in each category, including weather, overall affordability and the quality of its public schools.”

“Niche’s best cities rankings also incorporate real ratings from people who live there, so the residents’ love and appreciation for their home certainly helped The Woodlands hang on to the number one spot for two years running,” says Bell.

Gil Staley, CEO of The Woodlands Area Economic Development Project, also spoke to the perks that The Woodlands has to offer leading to its top ranking on the list.

“Our county, as a whole, is one of the fastest growing counties in the nation and our community has turned into a regional center for jobs,” Bell explained, adding that the highly ranked school districts in the county also make the Woodlands a desirable place to live.

“To take the number one spot, Fort Wayne had to have strong performance in several factors we take into account for the lowest cost of living rankings. In particular, housing and rental affordability in comparison to incomes in the area, are Fort Wayne’s strongest factors for affordability this year,” says Bell.

Forbes Magazine reported on why citizens in Fort Wayne also believe it’s such an amazing place to live: “Fort Wayne is a lovely place to visit and live. I’ve lived here for six years now and still haven’t seen everything. It’s family friendly and just friendly in general. It’s a small city compared to most, but there’s much to do. It’s full of history and rivers.”

The Top 10 Best Places to live in America according to Niche are ranked as follows:

For the rest of the rankings from Niche, check out their full report here.