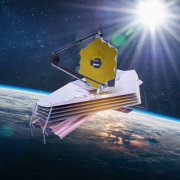 NASA has reported that a meteoroid hit the James Webb Space Telescope, causing “significant and uncorrectable” damage to one of the main panels the telescope uses to look into deep space.

Initially, the orbiting observatory telescope was launched last December, and NASA recently released a full set of new observations made from the telescope’s findings, including what is said to be the “deepest” most detailed picture of the cosmos to date.

All spacecrafts typically encounter micrometeoroids, but recently the James Webb Telescope detected six deformation on the telescope’s primary mirror panels that have been impacted by meteoroids.

“Each micrometeoroid caused degradation in the wave front of the impacted mirror segment, as measured during regular wave front  sensing. Some of these degradations are correctable by adjusting the math that NASA applies to the data that each panel collects,” according to a commissioning paper published last week.

“However one strike – which occurred between 22 and 24 May – was caused by a larger micrometeoroid and resulted in significant uncorrectable change to segment C3,” according to the document.

NASA has stated that fortunately these changes are not especially impactful when it comes to the telescope’s overall function. In fact, it’s exceeding expectations with its recent readings, but the damage done by the meteoroids could reduce the accuracy of the data being collected.

The recent more impactful meteoroid strike has raised concerns over the future functioning of the telescope.

According to the document, “it is not yet clear whether the May 2022 hit to segment C3 was a rare event. There could be a chance that it was an unlucky early strike by a high kinetic energy micrometeoroid that statistically might occur only once in several years.”

“The telescope may potentially be more susceptible to damage by micrometeoroids than pre-launch modeling initially predicted.”

“The project team is conducting additional investigations into the micrometeoroid population [and] how impacts affect beryllium mirrors. Another potential method to mitigate the strikes could involve minimizing the amount of time that the JWST spent looking in the direction of orbital motion, which statistically has higher micrometeoroid rates and energies,” the report cited.

NASA currently tracks more than 27,000 pieces of space junk, but this number is likely not close to the actual amount of debris in space currently.

“There is even more, smaller micrometer-sized (0.000039 of an inch in diameter) debris. Even tiny paint flecks can damage a spacecraft when traveling at velocities of up to 17,500mph, fast enough to go from London to New York in 12 minutes,” NASA stated.