Blog - Latest News
You are here: Home / Around The Web / Technology / Children and Smartphones 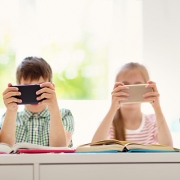 As technology becomes further embedded into our everyday life, children born into the digital age are naturally going to be exposed to technologies that previous generations did not have. It is very common for a child nowadays to know how to use their parent’s smartphone, work Alexa, or spend their free time watching YouTube videos. We have all seen parents placate a child with an episode of a cartoon on a tablet or a game on their phone. Some restaurants have even begun making these devices available in their dining areas. So, is it any wonder that these smart devices are finding niches in the children’s market? From educational games, to special ‘child-proof’ cases and parental-control apps. It seems smart-tech is fully integrated into our children’s lives.

In 2019 Common Sense Media reported that daily screen use (excluding homework usage) was at an average of 4.44 hours for 8-12 year olds and 7.22 hours for 13-18 year olds. The percentage of young people who watch daily online videos had doubled since 2015 alongside an expectable growing use of computers for homework. Predominantly however, Common Sense Media’s stats showed that, on average the percentage of children and teens who owned smart phones was at 19% for eight-year olds and 69% of twelve-year olds. This was up from 2015’s 11% and 41% respectively. This is not a topic exclusive to the US alone. This year, the BBC reported that half of the UK’s ten- year olds own a smartphone.

As with most new concepts, concern for the use of digital devices in our children’s lives is actively and repeatedly brought to the surface. Whilst there is little evidence that screen-time is harmful to children, the addictive nature of smart-phones and tablets can lead to other concerns with a number of variable factors. Disturbed sleep, slow social development and a lack of life skills, lowered physical fitness and mental health issues can all derive from an increased use in smartphones. A study from BMC Psychiatry on Problematic smartphone usage amongst children and young people, showed that approximately one in four children showed problematic smartphone usage which increased the odds of poorer mental health. This included signs of depression, anxiety, stress and poor sleep quality. Over 41,000 young people and children were studied with a fairly even gender split.

This is not something that just affects young people either, with many adults facing poorer mental health or even phone addictions due to unhealthy smartphone usage. Smart-phone addiction has been classed as an epidemic in modern society and is seriously affecting the lives of many. In perhaps a lesser known way, parent’s interactions with smartphones can be having a knock-on effect with their children and not just by setting a bad example. An article in USA today suggests that parent’s smartphone usage can also be damaging to a child’s growth, comparing it to ‘second hand smoke’. Distracting smart-technology takes away moments of interaction, whether quality time lost due to playing phone games, or a lack of eye-contact or effective responses all of which help a child learn and develop socially.

Yet, smart-phones as an object are not necessarily the problem which actually lies in the way they are used. As healthy eating is not just about eating the right things but balancing your diet, the use of technology is one that needs to be moderated and approached healthily to prevent it from becoming harmful. Smartphones offer an opportunity for addiction. Like many drugs, the release of dopamine into the brain when one receives a notification, causes a small high and thus can become addictive. This does not mean to say that they are completely bad, with regulation, smartphones can be a useful companion to everyday life. Many parents feel safer providing their child attending school with a phone, in order to contact them in an emergency or find out where they are. Time monitoring, enforced ‘unplugged’ social time and teaching children about the harms of technology overuse can help formulate a healthy relationship with smart-tech. There are also great parental control apps out there that can ban access to some websites alongside, screen-time monitoring with Apple’s iPhone now providing a built-in breakdown of screen time activities.

Social Media has had its fair share of blame, the self-esteem of young people hinged on the likes and comments of other bodiless users. Cyber-bulling is a real problem, with a lack of accountability and instant rebukes it is easy to write cruel comments and continue with your day. Yet those comments can affect another’s identity for a lifetime. Increased anxiety and depression and even suicides have been linked to Social Media. Some firms like Instagram, have been reviewing how their ‘like culture’ works and re-defining how likes are displayed and valued on the site.

Smartphones can be incredible platforms for creativity, socialization and education when used in moderation. Parent’s will know what is best for their children but perhaps work with your child to help them understand the disadvantages of prolonged tech usage. Create valuable opportunities to interact away from distracting smartphones, and work with your child to set boundaries and limits. Creating an awareness around the harms of social media and monitoring their usage can help to better tackle cyber-bulling should it arise. Perhaps look for ways that they can build their self-esteem and find gratification outside of social media and smart-technologies.

The Physicians Supporting Medicare for All

Amazon Stockpiling Inventory Because Of Coronavirus Risk
Scroll to top