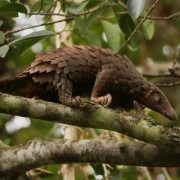 The hunting, capture and consumption of wild animals have caused a plethora of problems, including the current coronavirus pandemic and previous similar disease outbreaks such as SARS, which have been linked to the consumption of wild animals. The illegal wildlife trade has been detrimental to many animal species, pushing many to the brink of extinction. Pangolins are among the most highly trafficked species in the world, their scales, eaten as a delicacy or used in Traditional Chinese Medicines, for ailments such as arthritis. Following adjustments to the wildlife trade in light of the COVID-19 pandemic, China recently increased the protection of the scaly anteater to the highest level. Following this move, China released its list of approved traditional medicines which did not include Pangolin scales, reported in China Health Times Newspaper.

The Pangolin is a small mammal, covered head to toe in scales, used to protect themselves against predators. Often regarded as ‘scaly anteaters’ they eat ants and termites by picking them up with their sticky tongues. As one of the most highly traded animals, conservationist groups, organisations and activists have long been campaigning to save the pangolins, at risk of extinction. According to the WWF: ‘In 2016, a treaty of over 180 governments announced an agreement that would end all legal trade of pangolins and further protect the species from extinction. However, illegal trade of the species continues. WWF, together with TRAFFIC, works to protect species from wildlife crime.’

Although, as yet unproven, the Pangolin has thought by some, to have played a part in the emergence of COVID-19, acting as an intermediate in the transition of the zoonotic disease which jumped from animal to humans. Regardless of whether they served as a conduit in the outbreak, the treatment of wild animals has certainly been in the spotlight due to the risk of disease transmission, and the Pangolin is an animal at the centre of that debate.

In February, China’s National People’s Congress imposed a ban on the consumption of meat from wild animals. Although, many were uncertain on how this affected the Traditional Chinese Medicine (TCM) trade alongside the leather and fur industry. Animals used in traditional Chinese medicines were still allowed to be farmed. Further developments are expected as the Chinese government revises its laws. The adjustment to the treatment of the Pangolin is a welcome development. Zhou Jinfeng, secretary general of the China Biodiversity Conservation and Green Development Foundation said to The Guardian, “I am very encouraged, Our continuous efforts for several years have not been in vain.”

According to the conservation group, WildAid, ‘Pangolins have become a conservation priority globally in recent years as they are the most highly trafficked wild mammal, with upwards of 200,000 consumed annually for their meat and scales in parts of Asia. As pangolin populations in Asia have dwindled, an increase in shipments from Africa has emerged. In 2019 alone, authorities seized numerous massive shipments amounting to over 130 tons, which, depending on the species, could represent some 400,000 pangolins from Africa…’

The Pangolin is native to many areas of Asia and Africa and China’s populations have been severely depleted by consumption and medicinal purposes. Previously regarded as Class 2, their new classification has been increased to Class 1. For those who are caught hunting, killing, trading or smuggling the mammal a penalty of 10 years imprisonment will be imposed. Their new critically endangered status should help to protect those left in parts of China and imported from places such as Africa, but the government has also announced that they will begin to rebuild populations with habitat restoration efforts and field patrols, according to WildAid.

CEO of WildAid, Peter Knights commented: “China moved very quickly to close live wildlife markets and it is great news that they have now given their pangolins the same protected status as the panda. We hope this accelerates an end to legal sales of pangolin scales as soon as possible.”

He also stated to National Geographic: ‘“This is the single greatest measure that could be taken to save the pangolins, this sends a clear message that there are alternatives in traditional Chinese medicine and so you don’t need to use pangolins.”

The use of synthetic alternatives for animal products in Traditional Chinese Medicine is being explored to replace other animal ingredients as well. Conservationists are hoping that alternatives and further bans on wildlife produce will alleviate the threat to many endangered species. For now, this is a long awaited move that will hopefully protect and replenish the Pangolin species.

Growing Your Own Indoor Herb Garden