Blog - Latest News
You are here: Home1 / Around The Web2 / Lifestyle3 / Colleges Struggle With Soaring Student Demand For Counseling 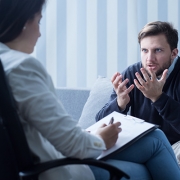 More college students are turning to their schools for help with anxiety, depression and other mental health problems, and many must wait weeks for treatment or find help elsewhere as campus clinics struggle to meet demand, an Associated Press review of more than three dozen public universities found.

On some campuses, the number of students seeking treatment has nearly doubled over the last five years while overall enrollment has remained relatively flat. The increase has been tied to reduced stigma around mental health, along with rising rates of depression and other disorders. Universities have expanded their mental health clinics, but the growth is often slow, and demand keeps surging.

“It’s an incredible struggle, to be honest,” said Jamie Davidson, associate vice president for student wellness at the University of Nevada, Las Vegas, which has 11 licensed counselors for 30,000 students. “It’s stressful on our staff and our resources. We’ve increased it, but you’re never going to talk to anyone in the mental health field who tells you we have sufficient resources.”

The Associated Press requested five years of data from the largest public university in each state. A total of 39 provided annual statistics from their counseling clinics or health centers. The remaining 11 said they did not have complete records or had not provided records five months after they were requested.

The data shows that most universities are working to scale up their services, but many are far outpaced by demand.

Since 2014, the number of students receiving mental health treatment at those schools has grown by 35%, while total enrollment grew just 5%. By last year, nearly 1 in 10 students were coming for help, but the number of licensed counselors changed little, from an average of 16 to 19 over five years.

On some campuses, that amounts to one counselor for every 4,000 students. An industry accrediting group suggests a minimum of one counselor per 1,500 students, but few of the 39 universities met that benchmark.

At most universities, students contemplating suicide or otherwise in crisis are offered help right away. Others are asked to schedule an appointment. For cases that are not urgent, the wait can range from hours to months, depending on the time of year and the design of the clinic.

Many schools that provided data to the AP said it takes weeks to get an initial appointment. Some other schools have adopted a model that provides screenings the same day students ask for help, but it can take weeks to get further treatment.

Students at Brigham Young University drew attention last year to delays after a student took her own life on campus. At the University of Maryland, students called for change after some on campus said they had to wait 30 days or more for an initial appointment. Student organizers called the campaign “30 Days Too Late.”

Other schools that have received student petitions to improve counseling include Michigan State, Louisiana State and Columbia and Cornell universities.

The rising demand for campus mental health care has been attributed to an array of factors. Stigma around the issue has faded, encouraging more students to get help. Disorders that once prevented students from going to college are no longer seen as a barrier. Some people believe social media fuels anxiety, while others say today’s students simply have more trouble coping with stress.

Many universities are rethinking how they provide help. More students are being steered to group therapy or anxiety workshops. Counseling centers offer yoga, and many train students to counsel one another. Some schools have signed on with companies that provide therapy over the phone or through video chats. Others urge students to try smartphone apps.

But some say the changes will help little if clinics remain understaffed. Many campus clinics don’t charge students for services and generate little or no revenue. Some schools are adding new campus fees to hire counselors or are subsidizing clinics through athletics revenue.

Overall, the AP analysis found that campus counseling budgets have increased by about 25% over the last five years, but levels vary widely, from more than $200 per student at some campuses to less than $40 at others.

On any campus, the greatest fear is that a student in dire need could fall through the cracks. Mike and Kim Predmore believe that’s what happened to their son, Chris, who was struggling as a freshman at Illinois State University in 2014.

He had just been through a bad breakup. He didn’t make the soccer team. He was stressed about school and wasn’t sleeping. One night, he texted a friend and talked about suicide. His family persuaded him to visit the campus counseling center for help.

Brexit Uncertainty Leaves the U.K. with a Bleak Outlook for Business