Blog - Latest News
You are here: Home / Around The Web / U.S. / Covid-19 ‘Worse Than The World Trade Center’ Claims Trump 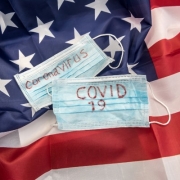 When President Donald Trump is asked his opinion on subjects he is not afraid of holding back, and his recent outburst shows he is not going to start being quiet now.

Discussing the coronavirus pandemic, Trump declared it was the ‘worst attack’ the United States had ever seen, and made sure China knew he believed they were responsible.

Comparing the pandemic to the World War II bombing of Pearl Harbor by the Japanese, or even the 9/11 terror attacks nearly twenty years ago, Trump said he believes coronavirus had hit America harder than anything before.

Trump’s administration have been discussing whether they can implement any punishments against China in response to what they believe to be poor handling in the early days of the disease, with many in power agreeing that if China had handled the issue correctly in the beginning the pandemic would not have become a global emergency.

In retaliation China has announced they believe America is using these tactics to deflect criticism away from their own poor handling of the issue.

When questioned further by a reporter who asked if the pandemic was an ‘act of war’, Trump responded by saying he believed the outbreak was the enemy and not China.

There have been tensions between the American and Chinese administrations for some time now and Secretary of State Mike Pompeo seemed in no hurry to try and repair the relationship between the two nations. Speaking about covid-19, Pompeo continued his attack on China, who he believes hid the true statistics of the outbreak in the early stages.

Although standing by his claim that there is ‘enormous evidence’ that the virus actually originated from a Chinese laboratory – a theory that has been dispelled by experts – Pompeo has admitted that the origins of the pandemic are still unclear.

Speaking with the BBC, Pompeo said, “Those statements are both true. We don’t have certainty and there is significant evidence that it came from a lab.” In response the Chinese state media have branded him a liar.

Meanwhile public health expert Dr Anthony Fauci has confirmed he believes the evidence, which backs up the claims that the virus was not man made, announcing he believed the virus “evolved in nature and then jumped species”.

Many are wondering why Trump has been so quick to lay the blame of the pandemic at China’s doors. November will see Trump continue his re-election campaign and his main achievement was to be the vibrant American economy, something he can no longer use due to the economy coming to a near standstill as the country fights back against covid-19.

While a recent survey found two thirds of Americans were not supportive of China, nearly the same figures felt that Trump had not acted quick enough to stop the spread of the pandemic.

With attention focusing on Trump’s handling of the crisis – or lack of it – being questioned, Trump was quick to brand the disease ‘the China virus’, only stopping using the phrase just before he spoke with China’s President Xi Jinping in April.

In an attempt to curry favor with the American electorate, both Trump and his potential Democratic opponent Joe Biden have been focusing on the anti-China feeling growing throughout the country.

Before the global crisis in January, Trump had started to work with the Chinese to end their ‘tariff war’ and had signed the first phase of a trade deal with the nation. However with the world’s economy currently heading towards a recession the second phase has been paused.

Originating from Wuhan in China last December, coronavirus made its way across the world reaching America in January and has currently infected more than 1.2 million Americans with nearly 79,000 related deaths. Global figures are currently at nearly 3.9 million with over 266,000 deaths.

Many leaders across the world have condemned the way America, and Trump in particular, has reacted to the crisis saying more lives could have been saved if actions had been taken earlier.

At home Democrats criticized Trump saying he wasted a crucial six weeks before making any plans to stem the flow of the pandemic. Ron Klain led the fight against Ebola in 2014 and said, “The US response will be studied for generations as a textbook example of a disastrous, failed effort.”

Is My Teen Ok Today? The Importance of Well Being in Young People During The...