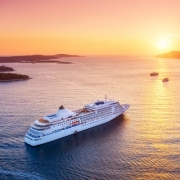 For fans of cruises 2020 has not been a year for good news.

First we heard that coronavirus had made its way aboard several liners leaving many ill and even a few fatalities.

Furthermore, as a result of the virus on these ships many were refused entry to their chosen destinations, meaning that many passengers were left stranded at sea while being confined to their rooms. Clearly not what they had signed up for when they first booked their voyages.

As a response to the continuing global pandemic many companies have had to pause their operations with some even selling off some of their fleet in an attempt to keep business afloat.

However there has finally been some good news for those wanting to climb aboard the ‘floating towns’ and set off into the sunset.

Princess Cruises have announced they will be debuting their ship – Sky Princess – in the UK in 2021 where she will set sail from Southampton and visit several locations in both the British Isles as well as the Baltics.

This is a huge achievement for the company as the ship had been homeported in America, however due to ‘deployment changes’ during the current Covid-19 pandemic the ship is moving to the UK.

Although the exact itineraries for the ship are still being drawn up, spaces on the cruise are expected to be on sale by the end of September, even though there is no definite date of when the first voyage will be.

There are further changes with some trips being changed such as the Baltic sailings, which will now be a round-trip voyage from either Southampton, UK, or Copenhagen, Denmark.

Sky Princess will also be taking over some of the sailings from its sister ship Crown Princess, specifically the trips around the British Isles.

While some sailings are still either on pause or canceled, with some canceled until at least December 15 2020, this move has been seen as a positive in the otherwise depressing story of cruise ships during 2020.

Princess Cruises are not the only cruise company that has announced upcoming deployments.

Holland America, one of the companies to be severely hit by cases of coronavirus, have announced their Rotterdam liner will be leading a five-ship deployment throughout Europe.

Sailing through the summer of 2021 the ships will depart from ports including Rome’s Civitavecchia, Barcelona, Piraeus, Venice and Amsterdam.

The Westerdam, Zuiderdam and Nieuw Statendam will also be joining the Rotterdam while the Zaandam will be returning to Europe as part of their ‘Voyage of the Vikings’ sailing.

While some itineraries will run for around seven days others, including the Zaandam, will sail for 35 days. The Collectors’ Voyages have also been confirmed as returning and these longer voyages can last up to 29 days and have several outings planned between April and November.

Locations to be visited on the new sailings include the British Isles, the Spanish Riviera, Mediterranean, French Riviera and the Iberian Peninsula. Northern Europe has also been included with voyages to Iceland, the North Cape, Greenland and Norway on the list.

Rotterdam, the company’s newest ship, will be running a seven-day ‘premiere voyage’ around Italy in the first instance with stops in Rome and Venice, before cruises around Northern Europe scheduled from the middle of August.

Like the airline industry, cruise liner companies were among the hardest hit sectors following the virtual close down of the world as nations grappled to get a grip on the fast spreading coronavirus pandemic, leaving many ships moored around the world.

The Diamond Princess was one of the first cruise ships to see coronavirus cases and thanks to the closed environment the numbers of those infected soon spread to around 700 passengers and crew.

The ship had the biggest outbreak of the virus outside China for several weeks before Italy took over the title.

A further 25 cruise ships had confirmed cases of coronavirus including the Grand Princess where 78 cases were confirmed and resulted in the ship being quarantined off the coast of California.

The news has come at a time when cases of coronavirus have started to increase around Europe however it is believed that by next summer the numbers should have dropped again.

With so much negativity around at the moment, the news of cruise ships restarting will be something to look forward to for many.

On announcing the news Holland America’s president Gus Antorcha said, “Our guests miss cruising as much as we do, and as we move closer to getting back to doing what we do best, we want everyone to feel confident in planning their European travel with us for next summer.”