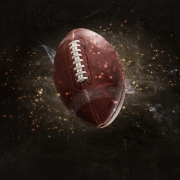 The Tennessee Titans and star running back Derrick Henry have come to terms on a four-year contract extension that means last year’s leading rusher will not have to play the upcoming season under the franchise tag.

ESPN’s Adam Schefter first reported the contract extension, just hours before Wednesday’s 4PM ET deadline for NFL teams to sign franchise tagged players to long-term deals. It looked as if former Heisman Trophy winner Henry was to be forced to play on his $10 million franchise tender in the 2020 season, but the two parties were able to agree on a four-year, $50 million deal with $25 million in guarantees just in time.

“And we have grown from the time I got there. (In 2016) we just missed the playoffs, (in 2017) we got into the playoffs and went into the second round. This year we went to the AFC Championship. We have grown as an organization and as a team and I think that speaks volume for the direction we’re headed.”

Henry had an outstanding 2019 season and was named the FedEx Ground Player of the Year after going to his first Pro Bowl. The 26-year-old led the league with a career-best of 1,540 rushing yards from 303 carries, with which he scored 16 touchdowns and had a high of 74 yards (touchdown).

“God has blessed me and my family tremendously, and I am thankful for this opportunity. I am thankful to the Titans organization for getting this done. I want to go out there and prove my worth and continue to get better.”

“I am very excited, and happy the process is over with … and now the focus is getting back to football and hopefully getting together (for training camp) at the end of this month,” Henry said. “I didn’t have any doubt at all. It was just a matter of time before we could come (to an agreement) where we’d both be happy and I’m glad we were able to do that. We came to a common ground where both of us could be happy.”

“I just thought the deal made sense for me, and if it gives us more room to bring in somebody else to help this team, I am all for it,” Henry said. “Any time you can improve your team at positions that we need, it is always a big benefit. Hopefully, if my deal possibly did that, hopefully we can bring somebody in that can help this team improve us more.”

The Titans have been linked heavily with free agent Jadeveon Clowney throughout the off season and Henry has expressed excitement over the prospect of joining up with the defensive end.
Former Texans first overall pick Clowney, who played a season with the Seahawks in 2019, has 33.5 sacks in 80 career games and would be a great fit for the Titan’s defense. The structure of Henry’s new deal, as well as Tannehill’s signed earlier in the off season, has reportedly paved the way for the signing of Clowney before the 2020 season begins.

“He’s a great player, and he’s played at a high level for a while. … If he wants to come to Tennessee, you’d definitely welcome him with open arms,” Henry said of Clowney. “Hopefully, if (management and Clowney are) talking, we can get something done and he can come join us. We definitely would love to have him and he can help us in a big way.”

The long-term contract extension, which can be so elusive for running backs in the NFL, is not the only great news Henry and his family have received this off-season as the Florida born star became a father earlier in the year.

“It’s a different feeling you can’t describe when you are looking at your child,” Henry said. “My daughter, she is so beautiful. Every day I look at her, that is all the motivation I need. I have to go hard for her each and every day. When I am training, doing anything else, I am doing it all for her.”