Blog - Latest News
You are here: Home / Around The Web / Science / Did Air-Pollution Worsen COVID-19? 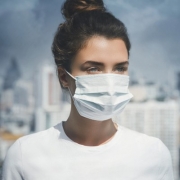 It is estimated that outdoor air pollution kills approximately 4.2 million people globally each year, according to the World Health Organisation. Among other ailments, air pollutants can increase mortality rates from strokes, heart-disease, lung cancer and respiratory infections. The World Health Organisation states: ‘More than 80% of people living in urban areas that monitor air pollution are exposed to air quality levels that exceed WHO guideline limits, with low-and middle-income countries suffering from the highest exposures, both indoors and outdoors.’ Some studies have revealed and are further investigating the part that air pollution has played in the COVID-19 pandemic, suspecting that the outbreak and death rate was actually exacerbated by global pollution levels. These studies are among many others which outline the negative impact humans have had on the environment as a cause for the emergence of deadly diseases, including our interaction with wildlife and the impacts of deforestation in releasing deadly pathogens. This new research on pollution levels, highlights even more of the far-reaching effects of climate change, meaning that we have an even greater responsibility to amend our approach to the environment.

According to National Geographic ‘The study, which must still undergo peer review for publication, found that the tiny pollutant particles known as PM2.5, breathed over many years, sharply raise the chances of dying from the virus. Researchers from Harvard University’s T.H. Chan School of Public Health analyzed data on PM2.5 levels and COVID-19 deaths from about 3,000 U.S. counties covering 98 percent of the U.S. population. Counties that averaged just one microgram per cubic meter more PM2.5 in the air had a COVID-19 death rate that was 15 percent higher.’

As National Geographic outlined, the study will still need to undergo peer-review, by which it is checked, tested and validated by other scientists. Yet, it points to the way in which these tiny pollutants, enter the body and cause various conditions. Many of which have been the ‘underlying health conditions’ known to make patients at higher risk of falling critically ill if they catch the COVID-19 virus. These include, breathing problems, hypertension, heart disease and diabetes. Air pollution is also known to weaken the immune system, another key factor in not only defending against general infections but has been particularly problematic when defending against the fast-acting coronavirus.

Reported in the BBC, Aaron Bernstein, the director of the Center for Climate, Health, and Global Environment at Harvard University stated: ‘“The evidence we have is pretty clear that people who have been living in places that are more polluted over time, that they are more likely to die from coronavirus.”

The Centre for Research on Energy and Clean Air recently reported that the measures to combat the COVID-19 crisis, such as lockdowns and remote working, has resulted in an approximate ‘40% reduction in average level of nitrogen dioxide (NO2) pollution and 10% reduction in average level of particulate matter pollution over the past 30 days.’ Which has resulted in 11,000 fewer deaths from air pollution. Power generation from coal has fallen by 37% and it is estimated that oil consumption has fallen by 1/3, both playing an important role in reducing NO2 levels. This has also avoided other health impacts including: ‘1.3 million fewer days of work absence, 6,000 fewer new cases of asthma in children, 1,900 avoided emergency room visits due to asthma attacks and 600 fewer preterm births.’

Many experts believe that we need to integrate climate change into COVID-19 economic recovery programs. That ignoring the positive steps the climate has made during this crisis would be careless and it would be more beneficial to harness the progression and take it further. The crisis has revealed where humanity has damaged the environment to our detriment and it is time to fix it. The BBC recently reported that environmental minsters from over 30 countries are meeting in an online conference, called Petersberg Climate Dialogue, co-hosted by the UK and Germany. It will look to organise a green economic recovery when the worst phase of the pandemic is over and look to forge international agreements on carbon cuts.

The last key climate change conference, COP26, was postponed due to the COVID-19 crisis. Alok Sharma, the UK Climate Secretary and president of COP26, said in the BBC: ‘The world must work together, as it has to deal with the coronavirus pandemic, to support a green and resilient recovery, which leaves no one behind.’

The pandemic has shown the world that it is possible to drastically reduce climate pollutants in a short space of time and there are very real and simple measure that we can take to utilize sufficient and positive changes. Whilst economies gear back up and industries unfreeze, we need to consider the type of world we would like to re-build rather than returning to the polluting norm that has damaged much of the world and so many lives.

How Businesses Have Adapted During The Pandemic
Scroll to top