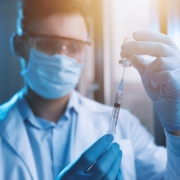 Doctors and health experts have said that US citizens should not get access to shots in October just because states have distribution plans in place, warning of the risks releasing a vaccine too early could cause.

The cries for patience come after the Centers for Disease Control and Prevention were documented telling state and local officials to prepare plans to distribute a potential Covid-19 vaccine as soon as the end of next month.

“These scenarios are designed to support jurisdictional, federal, and partner planning, but they are still considered hypothetical,” one document reads.

It is accepted by many experts in the health industry that there is a strong chance that a fully safe and reliable vaccine will not be available to the US public until the start of the next calendar year. However, it is now believed that the Food and Drug Administration could potentially give an emergency use authorization to distribute the vaccine before the Phase 3 clinical trials are completed, but only if the data is showing strong signs.

“How can you justify a substandard or lesser review for something that would be injected in tens of millions, maybe hundreds of millions of Americans?” asked Dr. Peter Hotez, Dean of the National School of Tropical Medicine at Baylor College of Medicine.

Hopes are high among US officials with three Covid-19 vaccines having already reached the stage of Phase 3 trials and a number of government and agency workers have reiterated since Russia announced intentions to release one early that no vaccine will be distributed in the US until it is deemed perfectly safe and fully effective.

Director of the National Institute of Allergy and Infectious Diseases Dr Anthony Fauci has said that he believes such a time will not have come by the end of October.

“If you look at the projection, of the enrollment (of trial participants) and the kinds of things you’ll need to get a decision about whether the vaccine is safe and effective, most of us project that that’s going to be by November, December, by the end of the year,” Fauci told CNN last week.

“Could this be earlier? Sure … that’s unlikely (but) not impossible.” We don’t want to see a repeat of the surges that we have seen following other holiday weekends,” he said.

“That doesn’t mean you have to lock yourself in a room and not enjoy what hopefully will be a nice weekend for people. But there are certain fundamental things that you can do and still enjoy yourself.”

“It’s important for two reasons,” Fauci said. “We don’t want to see a surge under any circumstances. But particularly as we go on the other side of Labor Day and enter into the fall … we don’t want to go into that with another surge that we have to turn around again.”

The CDC and NIH have had pandemic planning exercises in place for a long time that include strong recommendations that the administration in power prepares distribution methods and networks while a vaccine is being worked on. Trump’s government has claimed that it is indeed preparing such networks, while companies that are preparing the vaccine are preparing manufacturing capabilities so that they are prepared if one or more vaccine is conclusively found to be safe and effective.

“Right now I will say we’re preparing earnestly for what I anticipate will be reality … that there’ll be one or more vaccines available for us in November, December — and we have to figure out how to make sure they’re distributed in a fair and equitable way across the country,” CDC Director Dr Robert Redfield told Yahoo Finance.

“Let me begin with a brief update on the China virus. Over the last month, our new cases in the United States have declined by 38%. Last week, we announced a breakthrough in testing that will allow us to have over 150 million rapid point of care tests,” President Donald Trumps said during a press conference on August 31.

“These tests return the results in less than 15 minutes, and many will be deployed to nursing homes. We’re focusing very strongly on nursing homes, assisted living facilities, and other locations that serve high risk populations. So we’re going to have the 15 minutes and less tests, and we will have 150 million rapid point of care tests. That’s something.

“This evening I’m pleased to announce that AstraZeneca vaccine has reached phase three clinical trials, so that’s joining another group of vaccines that are very close to the end and hopefully approval. In the United States we’re doing things that nobody thought would have been even possible.

“This is a process that would have taken, in some cases, years, and we did it in a matter of months. Thanks to the efforts of Operation Warp Speed, we remain on track to deliver a vaccine very rapidly, in record time.”

WHO Study Supports Idea That Cheap Steroids Can Save Lives From Severe Covi...