Blog - Latest News
You are here: Home1 / News2 / Lifestyle News3 / Does Having A Tattoo Affect Your Job Prospects? 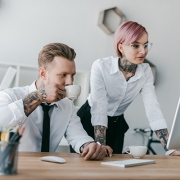 The tattoo industry is booming; US citizens spend around $1.65 billion a year on tattoos, with around 36% of Americans between the ages of 18 and 29 having at least one tattoo and 30% of college graduates possessing one. With statistics suggesting that a further 365 tattoo parlours will open in 2020 (averaging 1 per day), does having a tattoo carry the same stigma it used in the job market?

Tattoos have been around for thousands of years, with evidence suggesting it was practiced as early back as 3100 BC. While we may never know the true reasons for its inception all those years ago, there is no denying that it has prevalence in both modern and ancient communities across the globe. In Western society, tattoos are used as a form of expression and decoration, and they are no longer limited to a small section of society, but people from all walks of life and statuses.

While there is clearly a wider acceptance of tattoos in the workplace, there are still some taboos associated with them, particularly those which are large, visible or cover noticeable areas such as the face, neck and hands. Often there are negative assumptions made about the candidate and having visible tattoos could mean they are unfairly rejected from a possible job opportunity when directly compared to an identical candidate without tattoos. An article on Psychology Today highlighted a particular study which revealed that hiring managers would categorically not hire a candidate who possessed visible tattoos for fear that it would negatively impact the image of the company. Often such cases cannot clearly be proven unless those responsible for hiring openly admitted such practices, but for many affected individuals, the struggle to succeed in gaining their dream job is very real indeed.

Additionally, it has been suggested that women with tattoos are perceived much more negatively than their male counterparts, with research revealing a wide range of assumptions including them having lower intelligence, lower standards of appearance and lower levels of honesty. In addition they were thought to drink more heavily and be more promiscuous. With such significant biases in place, women with visible tattoos appear to be significantly disadvantaged, even where compared to males with equally visible artwork on their bodies.

The reasoning by some businesses and industries for not hiring those with tattoos often means that this kind of discrimination is justified, as there are clear and acceptable guidelines in place regarding employee appearance. On the one hand, organizations have the power to determine how they want their staff to represent the company and given the differing views on tattoos, some may simply feel it doesn’t fit in with their brand. There is also the question of timing too, as employing someone who already has tattoos is very different to an existing employing going against the company policy and gaining visible tattoos after they have been employed.

And whilst organizations may not refuse or retract a job offer based on the prevalence of tattoos per se, they can request that these are covered up during working hours, assignments or at events. There are a wide variety of affordable and comfortable camouflage sleeves and patches available which can be worn underneath short-sleeved uniforms and garments, along with high quality camouflage makeup which can completely cover even the darkest and most prominent of tattoos. Whilst many feel that they should not have to go to such lengths and should be accepted as they are, often the reality of having to gain stable, regular employment to pay bills, support their family and keep a roof over their heads means that this is the only option to take.

The most common professions that ask for tattoos to be covered up in the workplace include healthcare professionals, law enforcement officers, lawyers and attorneys as well as legal secretaries and any other staff representing the law firm, receptionists, those working for financial institutions and banks, luxury hospitality staff including porters and front of house, and teachers.

Whilst the evidence may indicate that people with tattoos are likely to face challenges in the job market, it is worth noting that this primarily relates to those who have large and visible tattoos on the face, neck or hands. For the vast majority of people in employment, their tattoos present no issues within the workplace and can be covered up as and when required. There is also research indicating that on aggregate, there is no discrimination against tattooed people, with figures showing they earn just as much as those without tattoos and are just as likely to be in employment.

For younger people about to enter the adult workforce, it would certainly be advisable to consider their future job aspirations before taking the plunge with a tattoo which is likely to be permanently on show. There are many areas which can be tattooed that are easy to cover up and so it would make sense to avoid any decisions which may impact their preferred career path, particularly if this is in the medical, legal or financial sectors.

To Stop Cancer, You Must Spot Cancer