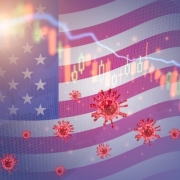 The current surge in coronavirus cases across the country has seen America’s attempts at kick-starting the economy fall flat after it emerged that the number of people claiming unemployment aid this week remained similar to the week before.

These figures further emphasize how much small businesses are continuing to struggle to contribute to the recovery of the economy.

Further reports show that during the first three months of 2020 the economy contracted at a 5% annual rate, which shows just how much the coronavirus pandemic has affected America. Experts predict that due to the countrywide stay-at-home orders the current quarter will see the economy shrink at a rate of around 30%. If these figures prove to be correct it would be the biggest quarterly contraction since 1948 when records first began.

A ‘snap-back’ is expected for the last six months of the year as more residents are allowed to visit stores and more businesses can reopen, however it is not believed that it will reverse the dip in the first half of the year.

Unemployment aid applications have dropped slightly with 1.48 million people applying for benefits in the last week although a program for gig workers and self-employed people allowed a further 700,000 people to apply for aid for the first time since the pandemic began.

With the two figures combined it is clear that aid requests have declined by 3% in the last weeks, which is less than last month.

Labor economist at ZipRecruiter Julia Pollak confirmed the news saying, “There has also been no real increase in job openings. What seemed like encouraging signs of recovery in May largely stalled in June.”

There was a small reprieve though with the news that orders for durable goods increased by 16% during May however the level of both orders and shipments are still considerably less than before the pandemic hit.

Big business has also taken a further hit. Despite reports that Disney would be reopening their theme parks in Southern California in July, they have had to postpone their reopening date while they wait for further guidelines from the state after the number of coronavirus cases increased significantly in the state over the last two weeks.

Department store giant Macy’s has also announced the loss of around 4,000 positions in their corporate departments, which equates to nearly 3% of the entire workforce as the company continues to shoulder the loss of profits.

Furthermore, the Houston area will see seven Apple stores re-close until the levels of coronavirus are back under control. Apple has also seen 11 other stores re-close throughout four other states for the same reason.

A Chapter 11 bankruptcy protection order has been sought by the Chuck E. Cheese restaurants parent company due to the on-going closures of all their stores throughout the last few months.

Although President Donald Trump – and his top economic adviser Larry Kudlow – have both stated that the economy is moving quickly many private economists believe the growth is continuing to be slow and steady despite the spikes across the country of Covid-19 cases. With the numbers of new figures of positive cases hitting 40,000 each day it is hard to see when unemployment numbers will start to drop at a faster rate. This week saw infection rates soar in states including Arizona, California, Florida, Georgia, Mississippi, Nevada, Oklahoma and Texas although experts have expressed concerns that the number of infections is actually far higher due to some people being asymptomatic as well as those who have not actually been tested.

With these figures seemingly spiralling back out of control it is understandable why some states including New York, New Jersey and Connecticut are imposing 14-day quarantine measures on those traveling from the above-mentioned states. A move which some believe is a breach of American’s constitutional rights.

There are also concerns that some states may bring back some of the limits on businesses that caused the sharp increase in job losses earlier in the pandemic. However, some consumers may opt to stay home anyway to try and stay safe.

In Texas Governor Greg Abbott has confirmed that they have paused the planned business reopenings due to the increase. This is in stark contrast to the news that around 78% of all small businesses had reopened as shutdown orders were lifted however there has not been any increase in that figure for the last week.

Homebase, a company that provides software for small businesses, has confirmed that the re-closing in some states is a cause for concern, especially if 20% remain permanently closed as predicted.

Ray Sandza of Homebase commented, “If you haven’t reopened yet, the likelihood of coming back is low.”

In Arizona the number of small business employees had dropped to less than 31% of the levels before the pandemic, a bigger drop than the week before which was 26.5%.