Blog - Latest News
You are here: Home1 / News2 / Technology News3 / February Is The Most Popular Month For Smartphone Launches 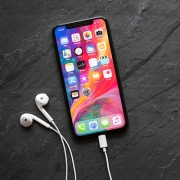 With the new year now in full swing, February promises an exciting array of smartphone launches. But what enhancements can we expect and from who?

With the Mobile World Congress 2020 just around the corner, taking place on February 24th-27th in Barcelona, there is much anticipation for what is likely to be unveiled. Suggestions are that in addition to the big brand names such as Samsung and Apple, there are likely to be surprising and promising additions from a number of OEMs including LG, Sony, OPPO, Vivo, and Xiaomi. In anticipation of the congress, here is a run down of some of the latest developments in smartphone technology which are set to be unveiled in the coming weeks.

A modern twist on the flip phone
Many of you will fondly recall the old flip phones of the 90’s, but the latest additions to the flip phone family appear to have come on in leaps and bounds. Samsung are expected to launch their new clamshell-style folding phone in mid-February, and have coined this the Galaxy Z Flip. It has a 6.7-inch display and is rumoured to have a lower price point than previous folding style phones which could make it much more accessible to the mainstream market. In addition, there is speculation that Samsung could also be planning to upgrade their existing suite of folding phones, although the details are yet to be revealed.

Progression of 5G
There has been much debate over the development of the 5G network which includes the ongoing discussions regarding the involvement of Huawei, with the US continuing to push for a complete ban for security reasons. Recently, the UK announced that they would allow Huawei to continue to be used in its 5G networks, but with restrictions.
Despite this unfolding drama, industry experts are fully expecting Nokia to release an affordable 5G phone at MWC and there have been suggestions that this may be called the Nokia 8.2, given that this is a mid-range phone that has long been due an upgrade. Apple has stood by its decision not to launch a 5G phone in 2019, but the rumour-mill is turning with revelations of a suite of 2020 iPhone models which could all include 5G, and OLED displays, alongside a more squared design.

Enhanced cameras
These days it is all about camera capabilities. And it appears that LG is taking note of this by focusing its efforts on boosting its camera armoury, with the upcoming LG G9 ThinQ characterized by an impressive new camera system on the back. Following hot on their heels, it has been suggested that the next Xperia model from Sony will also reveal additional camera functionality on the back.

First Qualcomm Snapdragon 865 Platform
There has been great excitement regarding the impending launch of Xiaomi’s Mi 10 as it will be the first phone to use the Qualcomm Snapdragon 865 Platform. For those who are unfamiliar, Snapdragon is the name of a family of mobile systems on a chip which are being developed by Qualcomm. These processes are designed to support next-level users experiences whilst also boasting all-day battery life. With the continued evolution of smartphone devices in everyday life and business, such innovations are essential for driving forward best-in-class mobile experiences, so there’s naturally much anticipation for what this will bring.

Under display cameras hit the mainstream
Many will recall the launch of the original Oppo Find X whose pop-up camera was created to solve the notch problem. Such innovations continue to try and address the challenges that are presented by the all-screen display. The natural evolution for Oppo appears to be the development of an under-display camera, which was first alluded to in July 2019. There is some speculation as to whether this will actually deliver on its promises, as even Oppo have accepted that there are quality challenges when housing a camera underneath a screen. But Oppo remains convinced that they have tackled the issues and are able to provide an under display camera which is ‘on-par with other mainstream devices.’

New Huawei models?
Huawei are in a tricky situation at the moment, as due to the ongoing ban, new smartphones from the brand can’t use Google apps, which does limit its value and capabilities alongside other smartphones. That said, there is much anticipation for the rumoured launch of the P40 and P40 Pro, given that the P30 Pro released in 2019 was rated for having one of the best camera phones. That said, the smartphone market is extremely competitive, so it has been suggested that the P40 will need to display some significant enhancements to keep it in the running. As yet, Huawei are remaining tight lipped as to when or even if this model will be released, but industry experts believe the likelihood of release is high.

Australian Campaigns to Get Tourists Back After BushFires
Scroll to top