Blog - Latest News
You are here: Home / Around The Web / Travel / Finally, Some Good News For Airline Industry 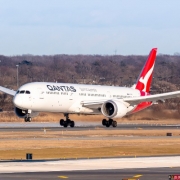 International travel is just one of the many industries that has been severely impacted by coronavirus due to the closure of borders and grounding of planes worldwide.

And although many countries are putting plans in place to kick start their economies it could still be some time before the world is back to ‘normal’.

However New Zealand and Australia have announced they are working on a ‘travel bubble’ to allow passengers to move between the two countries while keeping covid-19 out of both nations.

Currently both countries have reduced their international travel significantly in an attempt to stop the spread of the virus. As well as reduced flights, those entering the countries have to comply with a 14 day isolation period to ensure they are virus free before they are allowed to continue their journey.

If the plan proves a success the “bubble” could start to allow more countries in, providing they have low numbers of casualties. With the highest numbers of confirmed cases and fatalities in the world, it is not thought America would be allowed to join any time soon.

It is believed that a further plan has been considered to include Canada as well as some Asian economies, with the mind-set that by allowing business travel and supply chains to move, the world’s economy can start to grow again.

While both the countries’ governments have announced their plans a timeframe has not yet been put into place for the ‘trans-Tasman travel bubble”.

Simon Westaway, executive director of the Australian Tourism Industry Council confirmed, “The broader reality is the global travel market is in a very bad way. In our part of the world and around the trans-Tasman route it makes clear sense that a travel bubble can work in our neck of the woods.”

Australia’s main airline, Qantas, has already confirmed they would be happy to use the bubble with the chief executive Alan Joyce confirming, “It’s a positive we weren’t expecting up till now and hopefully it can be established as a model to open part by part the international network when various countries have a control on covid-19”.

By offering both New Zealanders and Australians a location “that they’re comfortable flying to”, the bubble would give them some hope that the world is starting to reopen.

Joyce continued, “If the New Zealand bubble idea gets traction and that we’re comfortable with that and that seems like it’s working well, then a similar approach could be done with markets where countries have covid-19 under control.”

Meanwhile Chris Roberts, the chief executive of Tourism Industry Aotearoa – the tourist board of New Zealand – confirmed that if the project were to go ahead the appropriate health safeguards would be needed to be put in place.

“If New Zealand and Australia can show this can work, then it is likely to be adopted elsewhere. It could be 12-18 months before we return to open borders.”

It is hopeful that if the travel bubble were to be a success it could be expanded to include some of their Pacific Island neighbors, such as Tonga and Fiji. If successful “New Zealand would likely look to places like Taiwan, Hong Kong, China and South Korea which are doing well in the fight against covid-19 as the next places to re-establish links with.”

Currently New Zealand and Australia are working on a bigger ‘trade bubble’ in the hope to work with countries including Canada, Singapore and South Korea and are looking into guidelines for successful and safe business travel.

It is believed that the aim of the ‘trade bubble’ would be to give the economy a much needed boost, allowing goods and services, as well as key people, to move more freely again. With this in mind there will be “guidelines to allow, on an exceptional basis, essential cross-border travel for purposes such as maintaining global supply chains, including essential business travel”
There is also a requirement for customs procedures to be fast tracked for items that are deemed essential, including medical supplies and food as well as give an injection into the world’s sea, land freight and air logistics networks.

The news will come as a much needed boost to an industry that’s struggling in both the countries. Air New Zealand has recently cut 300 pilot jobs while asking the remaining staff to take pay cuts of 30%. And while the country has moved to level 2 in it’s plans to lift their restrictions, the airline has cancelled further flights, with only around 20% of its usual flights operating – all at higher costs than before the pandemic struck.

Virgin Australia is currently in voluntary administration and has stopped giving passengers refunds or credits for their canceled flights, a move designed to protect the airline’s administrators.