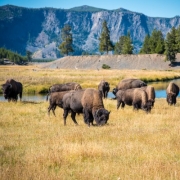 Wild bison are set to return to the UK for the first time in approximately 6,000 years. A small herd is to be released in the south-eastern county of Kent in spring 2022 in a bid to help secure the future of the endangered species.

The £1 million ($880,100) project was set up in an effort to help protect the endangered species of wild bison, but the animals will also have further benefits to Kent wildlife. It is hoped that the bison will naturally regenerate a former pine wood plantation in the region by killing off certain trees. This technique is used to create an ideal and healthy mix of woodland, scrub and glades which boosts insect, bird and plant life.

The 2022 release will see one male and three female bison sent into the Kent countryside with hopes that natural breeding will soon increase the size of the herd. Usually, each female gives birth to one calf every year. Similar projects have been completed with success in both the Netherlands and Poland, where these Bison will be received.

With populations of the UK’s most important wildlife falling by an average of around 60% since 1970, Britain is one of the most nature-depleted nations in the entire world and conservationists have stepped up efforts in recent times to try and stop the rot.

“Our vision to create a Wilder Kent is central to everything we do at Kent Wildlife Trust. To enable us to realize this vision we have joined forces with Wildwood Trust, a like-minded conservation charity with expertise in the captive management and breeding of native species.

Our flagship project is the Wilder Blean. This is starting now, in 2020, with the first phase of the project being completed by May 2023,” reads the mission statement of Kent Wildlife Trust.

“The Wilder Blean project will prove that a wilder, nature-based solution is the right one to tackle the climate and nature crisis we now face. Using missing keystone species like bison to restore natural processes to habitats is the key to creating bio-abundance in our landscape,” said Paul Hadaway from Kent Wildlife Trust.

“Bison will be arriving in spring 2022 and before then we will be installing all the necessary infrastructure, fences and gates as well as ponds and watering holes. There will also be improvements to visitor access by way of viewing platforms and new paths to ensure the impacts on visitor experience are as amazing as the impacts for species diversity and abundance.”

Bison are used to kill or remove unwanted trees and growths by experts as they eat the bark in large quantities or erode the bark by rubbing up against them in order to remove their thick winter fur. The dead bark creates excess amounts of dead wood that allows insects to thrive, which in turn provides ample food for birds.

Additionally, the felling of trees by the bison in turn creates clearings in the landscape, which allows native plants to grow in abundance, and helps the ecosystem to thrive. The Kent Wildlife Trust expects nightingales and turtle doves to benefit the earliest from the bison’s ‘ecosystem engineering’.

“The way bison graze and interact with their surroundings is unique; targeting bark rather than other parts of a plant, creating ‘bull pits’ or ‘sand baths’ by dust bathing to remove parasites, removing moulting fur by rubbing against trees and due to their large size and strength, creating corridors through densely vegetated patches which in turn links up microhabitats.

“All these behaviours can create a healthy life cycle in woodland and create gaps in the canopy that provide a 3-dimensional habitat to the benefit of a variety of species. Without an animal like bison, these functions are missing in woodlands, and this project aims to restore those functions.”

The European bison is the species that will be released in Kent in 2022 and is the closest living relative of the now-extinct steppe bison. It is believed that the steppe bison roamed across the UK for many years until hunting and habitat changes led to the species’ global extinction around 6,000 years ago.

“This initiative could be good news for Britain’s battered biodiversity,” said Rebecca Wrigley, of Rewilding Britain, which is an organization founded in 2015 that aims to restore large numbers of the UK’s natural habitats that have been lost over the years.

“It’s increasingly clear that bold and imaginative rewilding is urgently needed to tackle the country’s worrying loss of wildlife. Far more needs to be done across the UK to reintroduce large herbivores and unleash their biodiversity-boosting rewilding magic.

“Sometimes in the rewilding debate people think that it’s a look back to the past, but that’s not what we’re about. We’re about trying to find the right natural solution for the modern world,” Wrigley added.