For This Caricature Artist, First Impressions Are A Vital Key | Christine Greene

You are here: Home1 / Features2 / Culture Feature3 / For This Caricature Artist, First Impressions Are A Vital Key | Christine...

Thanks to her ability to draw instant impressions from her subjects, artist Christine Greene swiftly creates fantastic caricatures that produce endless laughter and excitement. 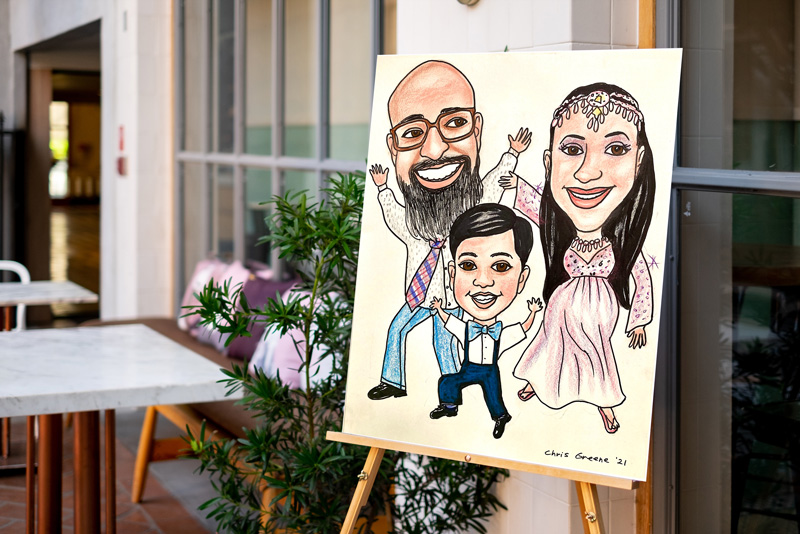 In some ways, a caricature goes against the basic ideas of art. A slow, steady, and patient pace is thrown out the window for a speedy and vibrant style. Drawing correct proportions is out of the question, as well – in the caricature medium, odd shapes and exaggerated designs are encouraged.

Being able to draw based on the instant impressions received from the moment you lay eyes on your subject, however, may be the most fundamental skill for a caricaturist. Analyzing their countless features and personality only having to portray them a minute later can seem like an intimidating challenge for some, but for New York artist Christine “Chris” Greene, it’s become a second nature as she’s progressed through her career.

Caricature caught the eye of Greene for a bevy of reasons. The form was fast, it allowed her to capture the likeness of her subjects in a “funny and humorous way,” and she loved the laughter and joy that her customers exhibited after seeing her finished product.

To Greene, her subjects are not just clients – they’re inspirations. “It’s an immediate impression of the person, and I ask them what interests them, so I immediately in my mind know exactly how to portray that in a caricature, like if they’re interested in basketball or cooking or anything like that. I have a lot of experience in my background to know how to approach those subjects in a quick and humorous way.”

Greene recognized her love for art, specifically when it comes to faces, early on in her life. “I’ve always, even as a child, was interested in drawing, and especially drawing people’s faces. I was amazed that people really thought they looked like them. So I always loved portraiture, and for awhile I thought I’d go into being a portrait artist. So I went to the Art Students League and I took painting courses.”

The artist certainly arose from humble beginnings. Her parents came to the United States from Poland in the 1950s, and having to start a new life from scratch was a struggle for the family. Because of their poor status, Greene and her older sister didn’t have access to many toys – so they ended up making their own, furthering Greene’s creativeness.

“My sister, who was three years older than me, was very, very creative. She and I would make up stories, we’d draw different things, and cut them out and play with them, or paint them on wood. They would be our characters on the blocks.”

Of course, Greene certainly had help on the way to where she is now. “I had mentors, I had one particular artist in the city who I met, who had a studio next door to my apartment, and he was a caricature artist. He was doing them for parties, so I said ‘I’ll go along with him to a party and see how he works,’ and that’s how I got into getting clients.”

“I learned how to draw caricatures full-face,” Greene said in regards to what her mentor was able to pass down to her. “Before that, I was doing them in profiles. I learned from him the technique of drawing them frontal, and with a small body, [and] describing them, he did a lot of that.”

Greene also learned other valuable tidbits, such as the equipment she needed to carry and how to relate with people. “He was very warm and extroverted, and he made people feel comfortable, and that’s very important to what I do.” 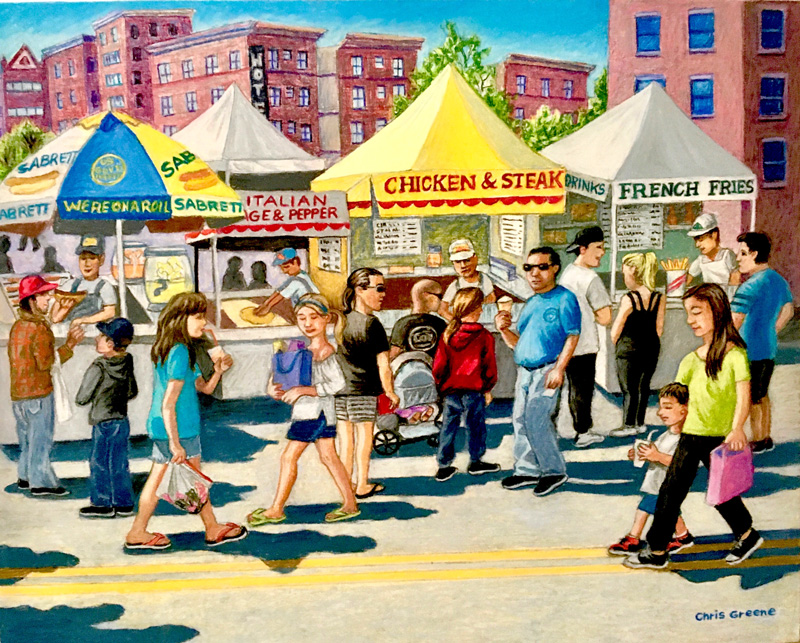 “When I first look at a person, I immediately look at the shape of their head and I try to make sure, when I’m doing it, that I capture that shape that I first saw. If you don’t capture the shape correctly, it doesn’t look like the person.” 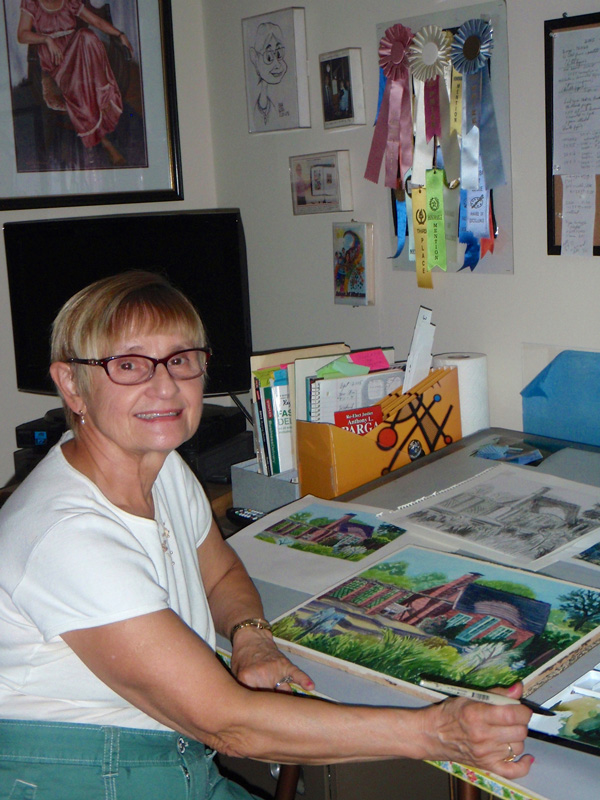 When it comes to her drawing process, Greene doesn’t focus on any specific facial features — such as eyes, nose, or mouth — to begin. Rather, she concentrates solely on the shape of her subject’s head, which she explains if done incorrectly can essentially break a drawing.

“Then I try the eyes, nose, and mouth, and then I put the rest of the jawline and the chin afterwards. One thing relates to the other, and once I have the drawing down, then I do a small body based on what they tell me, what they’re interested [in]. And then I color it, of course. Most of the time people will want them to be in color, rather than black and white.”

Speed is one of the most important attributes a caricaturist requires. The answer to the question of where Greene learned to be quick, yet flawless with her work, goes all the way back to the 1964 World Fair.

“[At] the World Fair, they were looking for art students who were trained to do profiles on these copper sheets that they put into a mat, and it would be a souvenir of the World Fair. I applied for that, and you did it with a stylus that would enforce the image of the profile on this copper. You couldn’t make a mistake. You had to immediately go and, with eye-hand coordination, do the profile.”

“It trained me to be able to look at a person and draw in one line what I saw,” Greene said, emphasizing the influence the profiles at the World Fair played on her approach to caricatures today.

While artwork is usually the artist’s own vision or desire, caricaturists receive direction from their customers. Greene is always willing to create what will please her clients, whose requests can vary based on the kind of function. “It’s different with the clients that are at the parties, because they’re a little bit more general. They leave it mainly up to me, they tell me what their interests [are] or how they expect to see it, and then they leave the rest up to me.”

“The clients that I get who want caricatures from photos that they email me, for a particular gift or an occasion, they will be very specific as to what they’re looking for, all the way down to what they should be wearing, what should be in the background. Sometimes they want to be in a car, [and] they even send me photos of the car. Very specific things,” Greene said with a laugh. 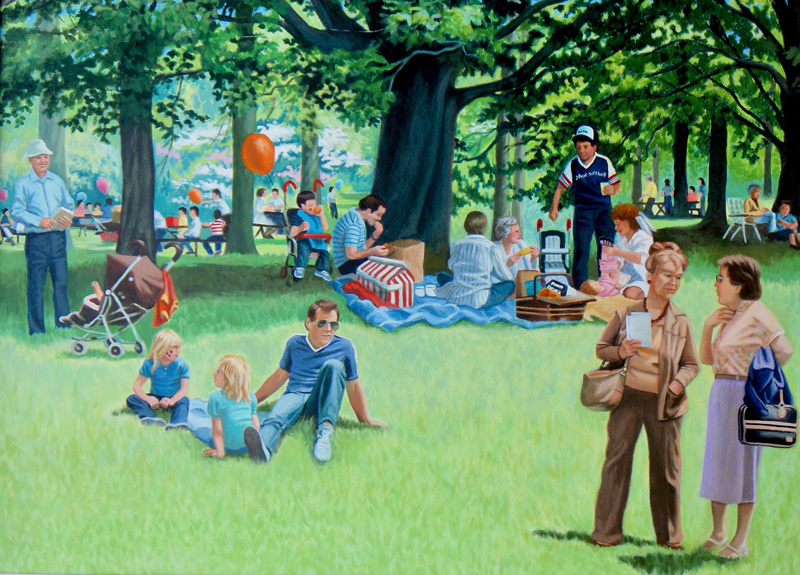 “I’ve had more success at the caricatures than I have at the fine art. Fine art is a hard sell, and I generally have preferred just taking from my own love and interest, and then maybe interesting someone else in it.” 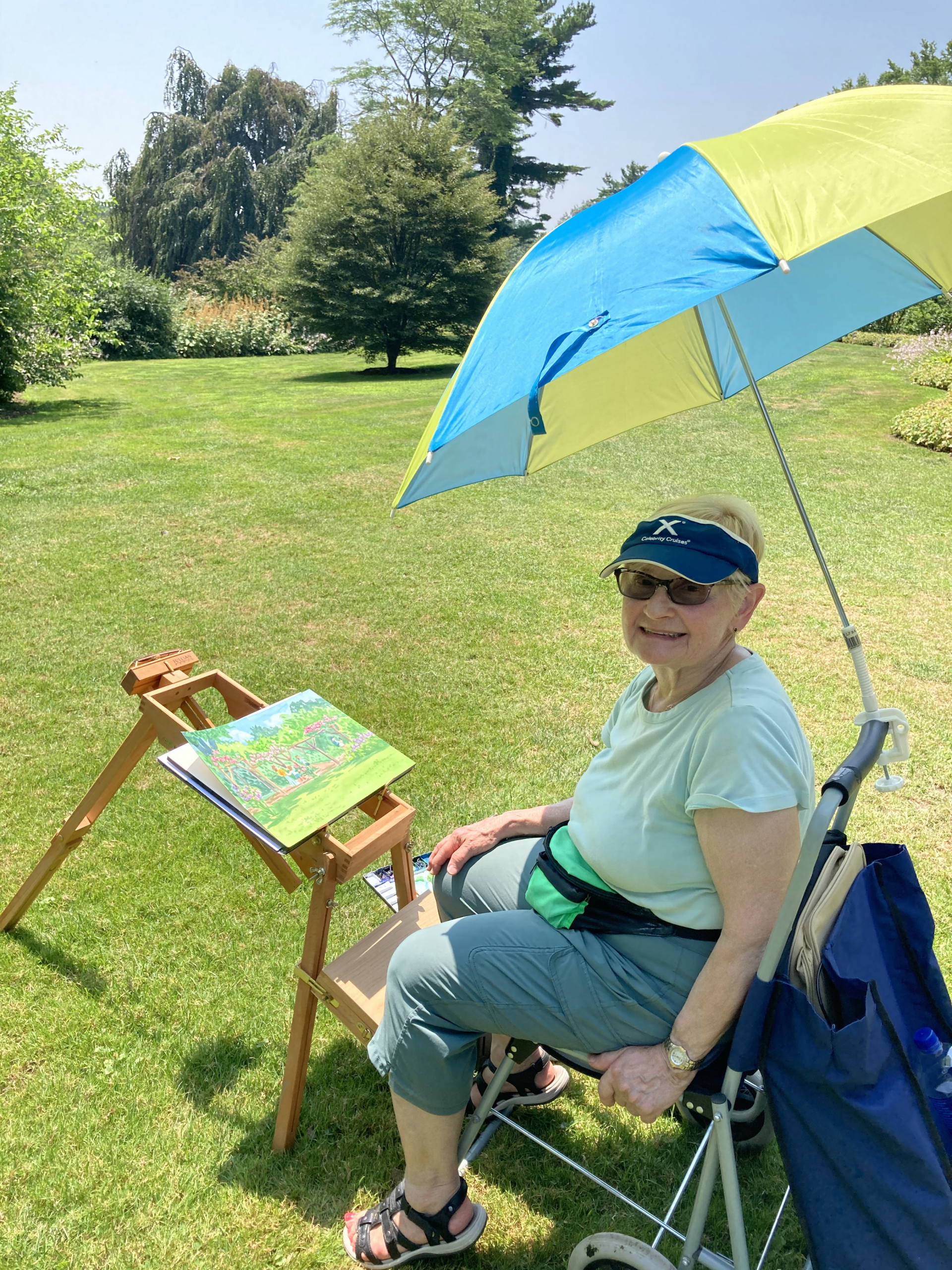 While caricature has become Greene’s highly-praised calling card — she feels it reaches more people than any of her other mediums do — that hardly means she doesn’t like or excel with various forms of art. She has expertise in watercolors, acrylics, oils, and pastels, and can even add “illustrator” under her name. She provided black and white illustrations for “French Fries For Siblings: The Forgotten Children of Autism,” a book that focuses on the brothers and sisters of austistic children.

Greene also holds the honor of being the newly-elected treasurer for the Long Island Branch of The National League of American Pen Women. “It’s a women’s organization, originally [centered around] women journalists who were interested in working together in order to get published. Then it spread to the arts and music, and also painting. It’s very selective,” Greene explained. “It’s quite an honor to belong to that group.”

Greene allows her religious background to play a role in her creations. “Before I start, I always try to center myself and ask God to help me and to draw with me. I’m a religious person, so I always feel that art is inspired by God, and it’s a gift from God. So I’m always concise of [the fact] that God is inspiring me to do this work for a reason.”

In Greene’s opinion, the biggest challenge when it comes to art doesn’t involve drawing or techniques – rather, it’s the business side. “The biggest challenge is creating your own career. It’s not enough to just be talented and to have your technique and create beautiful work, you have to know how to market it.”

Every artist has their own idea of how success in the art world is truly defined. Greene explained to me that for her, success comes when you’re able to portray what you originally envisioned. “Whether you are happy with the work you’re creating, that’s success to me. If what you have in your head and your heart comes out the way you want it to on the paper or canvas, and you’re happy with it, that’s success.”

As to what Greene attributes her own prosperity in the arts to? “The basics. I made sure that I learned about the different art, drawing, painting, and creating. From there, if you have the basics, you can create your own vision.”

To see Greene’s different types of artwork or to book her for your next event, you can visit her website.