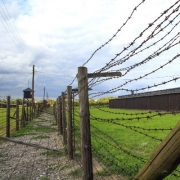 A 93-year-old former Nazi guard has been found guilty of participating in the murder of over 5,000 prisoners at a concentration camp during the Second World War.

The former SS guard, named Bruno Dey, was issued a two-year suspended sentence last week following a nine-month trial in Germany. Dey was convicted of 5,232 – the number of prisoners killed at Stutthof concentration camp during his time there – counts of accessory to murder, as well as one count of accessory to attempted murder.

During his time at Stutthof concentration camp in then Germany-occupied Poland, Dey played the role of one of the camp’s watchtower workers, where he would survey the camp and watch over prisoners, ensuring anyone attempting to escape was found and punished. Because Dey was aged just 17 and 18 during his time working at the camp, his case was tried at a youth court in Hamburg.

Dey did not refute claims that he worked as an SS guard at the concentration camp, but instead claimed that this did not amount to guilt, and he had no choice but to follow orders.

The prosecution argued against this, claiming that Dey was an accessory to murder by preventing inmates escaping from the concentration camp, which was one of the last to be taken from Nazi control at the end of the Second World War in 1945.

During his closing statement, Dey apologized to listeners for the suffering that camp inmates suffered at the camps, but the 93-year-old still refused to shoulder any of the responsibility.

“How could you get used to the horror?” German judge Anne Meier-Goering asked just before she announced the verdict.

Approximately 65,000 died during the six years that Stutthof concentration camp operated, many of those Jews or suspected Jews. A large proportion were murdered together in the camp’s gas chambers, while others died as a result of hunger, sickness and exhaustion in the appalling and tragic conditions they were subjected to.

The trial lasted for around nine months and court sessions had to be limited to two hours per day for two sessions a week due to the defendant’s old age. Breaks also had to be taken every 45 minutes and there was a medical team constantly at the ready to check on Dey during court proceedings.

German news broadcaster NDR has reported that dozens of open cases against former Nazis are still open throughout Germany but with old age affecting most defendants, it has been said by experts that Dey’s may have been the last trial of its kind.

Just as in the Dey case, prosecutors in recent years have been able to secure successful convictions for former concentration camp workers by claiming that by being part of the way the camps operate, they were accessories to the murders there, despite there being no evidence of involvement in specific killings.

“Even though large tracts of Europe and many old and famous states have fallen or may fall into the grip of the Gestapo and all the odious apparatus of Nazi rule, we shall not flag or fail,” Winston Churchill said during a speech to the UK House of Commons in 1940.

“The battle of France is over. I expect that the Battle of Britain is about to begin. Upon this battle depends the survival of Christian civilization. Upon it depends our own British life, and the long continuity of our institutions and our Empire. The whole fury and might of the enemy must very soon be turned upon us. Hitler knows that he will have to break us in this island or lose the war,” Churchill told RAF pilots later on in 1940.

“The gratitude of every home in our Island, in our Empire, and indeed throughout the world, except in the abodes of the guilty, goes out to the British airmen who, undaunted by odds, unwearied in their constant challenge and mortal danger, are turning the tide of the World War by their prowess and by their devotion. Never in the field of human conflict was so much owed by so many to so few.”

“I am very glad that Mr Attlee described my speeches in the war as expressing the will not only of Parliament but of the whole nation,” Churchill said following the conclusion of the war.

“Their will was resolute and remorseless and, as it proved, unconquerable. It fell to me to express it, and if I found the right words you must remember that I have always earned my living by my pen and by my tongue. It was the nation and race dwelling all round the globe that had the lion heart. I had the luck to be called upon to give the roar.”

Fresh Calls To #FreeBritney From Her Extended Conservatorship
Scroll to top