Blog - Latest News
You are here: Home1 / Around The Web2 / Lifestyle3 / Free Your Mind: 4 Lifestyle Changes For Your Better Mental Health 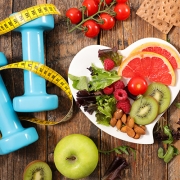 Oct 10 marked World Mental Health Day, which is celebrated every year to help raise awareness and support of mental health issues around the world. To help you take care of your mental health, we’ve rounded up four lifestyle changes that can be easily made to boost your mental well-being.

A new study published in 2019, which looked at 10,386 adults, found that men and women who were lifetime abstainers from alcohol had the highest level of mental well-being at the start of the study.

Women who were moderate drinkers – defined as seven drinks or less a week – or who quit drinking during the study, also benefited from a boost to their mental health, with levels of mental well-being close to those of lifetime abstainers within four years of quitting.

With the rise of social media, many studies have looked into its effect on our mental health. A British study that surveyed 12,866 teens aged 13 to 16 found that checking one’s phone several times a day was associated with lower mental well-being. This was especially so in girls, possibly due to social media use affecting sleep and physical activity, which are linked with improved mental health.

Meanwhile, a US study that looked at adults who spent one hour a day on Facebook found that those who quit the social media site not only reported feeling happier, but also increased their time spent doing offline activities like actually socialising with family and friends.

Increasing the amount of fruit and veg in your diet could also give your mental health a boost. In a study published this year, US researchers looked at data from 245,891 phone surveys and found that adults with a high consumption of fast food like fries and soft drinks, and a lower habit of eating of healthy meals including fruit and veg, were more likely to report symptoms of moderate or severe psychological distress.

The researchers said that the findings are in line with those from other studies in other countries that have found a similar link between diets and mental health.

In addition to eating better, results published in September 2019 from the world’s largest review on nutritional supplements and mental health symptoms suggested that certain supplements could help with some mental health conditions, when taken in conjunction with conventional treatments.

The research, which looked at 33 meta-analyses with a total of 10,951 people, found strong evidence that omega-3 fatty acids could reduce depressive symptoms more than just antidepressants alone, and some evidence that the amino acid N-acetylcysteine could be beneficial for mood disorders and schizophrenia.

WeWork Reportedly is Favoring JPMorgan over SoftBank to Bail Out the Buckling...