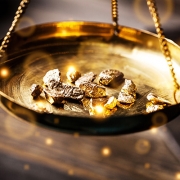 Gold traded as much as 1.5% higher in early Friday trading, nearing a six-year high after a US airstrike killed one of Iran’s most powerful military leaders on Thursday and spiked tensions between the two nations.

The safe-haven asset rocketed as high as $1,551.30 per ounce, less than a 1% gain away from its highest price since April 2013. Gold typically surges in the wake of rising geopolitical tension, as unexpected volatility often drives investors away from the stock market and into hedge assets.

President Donald Trump ordered the strike that killed Qassem Soleimani, the leader of Iran’s elite Quds Force. Iran’s supreme leader warned a “harsh retaliation is waiting” for the US in the wake of the attack, and an advisor to Iranian President Hassan Rouhani said the US crossed a “red line” with the attack.

The Pentagon claimed Soleimani was planning attacks on US service members and diplomats abroad, and that the general and his forces were responsible for “the deals of hundreds of American and coalition service members.”

“This strike was aimed at deterring future Iranian attack plans,” the Pentagon added.

The Friday morning surge helped prop gold up higher following its biggest yearly gain in nearly a decade. The precious metal passed its $1,500 per ounce psychological level on December 26 and ended the year up 18.8%, driven higher by a weakening dollar and global economic slowdown.

Gold serves as a traditional safe-haven asset for traders looking to flee unpredictable markets. The precious metal’s allure, scarcity, and historic value solidify its status as a popular hedge bet.

Other haven assets, including Treasury bonds, platinum, and silver, rose on news of the US strike.

“Our base case here is that a full-blown war between the U.S. and Iran is unlikely, though we appreciate the old adage that nothing brings a country together more effectively than an external threat, and Iran’s government right now is extremely unpopular,” the economist wrote. “The infrastructure of the oil sector, though, is a likely target in the event of tit-for-tat escalation.”

Lauren Hoffmann Is Making Life Without Maternity Leave Work, But Why Should...
Scroll to top