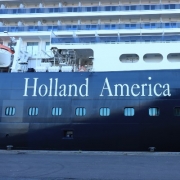 Announcements have been made that the cruise liner company Holland America Line (HAL) will be removing four of its ships from their fleet in the upcoming months.

The acquisition of the ships increases Fred Olsen’s fleet to six ships, with the possibility of an extra 1,380 and 1,404 guests on each ship, increasing the number of passengers the company can entertain each year.

HAL have also confirmed that Veendam and Maasdam will be moving to their new home in August 2020 with any deployments already organized for the ships by themselves to be cancelled. However, it was also confirmed that a few of the itineraries would be continued by the new owners including the Amsterdam’s Grand World Voyage which has been postponed from next year to 2022 and will take place aboard the Zaandam.

The Rotterdam’s Grand Africa Voyage, due to start on October 10 2021 will now be sailing on Zaandam however the dates will remain the same.

Chief executive officer of Holland America Group and Carnival UK, Stein Kruse, confirmed the move saying, “It’s always difficult to see any ship leave the fleet, especially those that have a long and storied history with our company.”

Kruse continued, “However, Holland America Line has a bright future ahead that includes recent Pinnacle-Class additions, with a third sister ship next year that will continue to maintain our overall capacity in the marketplace.”

Holland America Line’s president Gus Antorcha also commented, not just on the news of the sale but also his plans for the company’s future, saying, “I recognize and appreciate the deep affection our guests have toward our company and the ships in our fleet. While streamlined, our diverse fleet continues to offer exceptional options for cruisers looking for a mid-sized ship experience to destinations all around the world. I look forward to carrying on those beloved shipboard offerings while cultivating new ideas to bring to our guests.”

The second of four S-Class ships; the Maasdam hosted 1,258 guests and was the fourth ship to have the name in the Holland America Line fleet. Joining the fleet in 1993 the ship sailed voyages including to Alaska as well as the South Pacific. Meanwhile the Veendam joined HAL’s fleet in 1996, again becoming the fourth ship to share a name, and was able to host up to 1,350 guests at a time.

Amsterdam became a member of the HAL fleet in 2000 while the Rotterdam joined the company in 1997.

Any guests who have already booked places on any upcoming voyages will be notified of any changes or cancellations as well as information on whether the cruise will continue with their new company. However guests will also be able to request a cash refund if they would rather, something that experts believe could see high demand following the recent health concerns of cruises during the covid-19 pandemic.

Cruises that have been cancelled include the Amsterdam’s Grand Voyages and Canada/New England cruises. The Maasdam will also see the itineraries in South Pacific, Asia, Australia and Mexico cancelled alongside Rotterdam’s Europe, South America, Panama Canal, Caribbean and Hawaii sailings and Veendam’s Europe and Caribbean trips.

Speaking about the new purchases, Fred Olsen Junior – chairman of Fred Olsen Cruise Lines said, “We have chosen these vessels as they will fit seamlessly into our existing fleet of small ships, each carrying under 1,500 guests, bringing with them new and larger public areas whilst not compromising on our small ship experience.

“The naming of the vessels is important to us. Bolette and Borealis are both names of ships we have had in years gone by.

“This increase in our capacity demonstrates our confidence in the future. With over 170 years of seafaring history, we have sailed through many difficult periods. With these new additions to the fleet, we will come out of this current situation stronger than ever, ready to deliver the award-winning itineraries that we are famous for.”

Peter Deer, Fred Olsen’s Managing Director continued, “This is an exciting chapter in the history of our company, and I know our loyal and returning guests will be looking forward to exploring our new ships as soon as they can.”

Fred Olsen currently have four other ships – Black Watch which carries 799 passengers, Braemar that carries 924 passengers, Boudicca carries 853 passengers and the Balmoral which is currently the fleet’s biggest ship with a capacity of 1,325 passengers. The two new ships will be rebranded and launched later in the year.

It has been confirmed that the sale of the four ships is part of Carnival Corp’s reduction of 13 ships from their global brands.