Blog - Latest News
You are here: Home1 / Around The Web2 / Culture3 / Harvard Students Install a Memorial Site for Opioid Victims at Arthur M.... 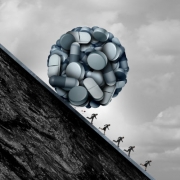 The installation featured the names of 250 people who died from opioid overdoses on the museum’s stairs.

Last week, Tufts University in Boston became the first academic institution in the United States to remove the name of the Sackler family, owners of widely reproached opioid manufacturer Purdue Pharma, from one of its buildings. The university said that the decision was taken in response to the demands of students who found the Sackler name “objectionable” and “incongruous with the mission of the school” from which the name was removed. The next day, December 6, students at Harvard University followed with their own demand to do away with the Sackler name on one of the museums on the University’s campus with an art installation that honored people who were affected by the lethal drug OxyContin.

On the morning of last Friday, a group of students in the History of Art and Architecture department transformed the lobby of Harvard’s Arthur M. Sackler Museum into a memorial site dedicated to victims of the opioid crises in the Massachusets area. Titled Remember Their Names, the installation featured the names of 250 people who died from opioid overdoses in paper notes on the museum’s stairs. A mock-up plaque with a black ribbon welcomed visitors to the museum with the text: “IN SOLEMNITY WE RECORD THE COMPLEXITY OF THE SACKLER LEGACY … WE MOURN AND HONOR THE VOICES SILENCED BY THE OPIOID EPIDEMIC.” The alternative plaque is modeled after an existing donor-recognition plaque dedicated to Arthur M. Sackler.

Along with installation, more than 30 students, faculty, museum workers, and members of the community who have been affected by the opioid epidemic gathered at the museum’s lobby to share stories and support each other.

The project was led by three students in the History of Art and Architecture department — Kaitlin Hao, Wendy Yu, and Samantha J. Meade — who developed the installation as an assignment for a class on art and social engagement with art history professor Suzanne Preston Blier. The three then joined forces with a larger group of about a dozen students from the department who have been planning an anti-opioid action at the museum since September.

The students told Hyperallergic that they had received permission to hold the action at the lecture hall at the museum, but were not permitted to use the museum’s lobby, were they finally installed their project. The university allowed the installation to remain at the museum lobby through Monday, but not without a confrontation between the students and officials at the department.

“We went in on Friday fully expecting to get arrested,” Hao, who conceived the idea for the project before collaborating with Yu and Meade, told Hyperallergic in a phone conversation. “I contacted my family beforehand and told them that I might be arrested.”

In an email, art history major Gavin Moulton told Hyperallergic, “Some (eventually empty) threats were made against us concerning the police, grades, and paying for damages.” Moulton added that the group was careful to use materials, such as painters cloth and painters tape, that would not damage the building.

Hyperallergic asked David Roxburgh, chair of the Harvard History of Art and Architecture department, if students were threatened with punishment for holding their protest at the museum’s lobby. Roxburgh sent Hyperallergic an email that read:

Trump Impeachment Witnesses Are Time 2019’s ‘Guardians of the ...