Blog - Latest News
You are here: Home1 / Around The Web2 / Science3 / Historic 1st Photo of a Black Hole Named Science Breakthrough of 2019 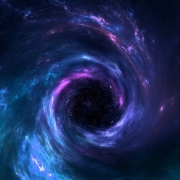 It was once thought impossible. Then it happened.

The first image of a black hole, previously thought nigh impossible to capture, was named the top scientific breakthrough of 2019 by the journal Science.

Black holes have gravitational pulls so powerful that, past thresholds known as their event horizons, nothing can escape, not even light. Supermassive black holes millions to billions of times the mass of our sun are thought to lurk in the hearts of virtually every large galaxy, influencing the fate of every star caught in their gravitational thrall.

Using Albert Einstein’s theory of general relativity, German physicist Karl Schwarzschild was the first to lay the foundation of the science describing black holes. In the decades since then, scientists have detected numerous signs of black holes, such as the effects their gravity have on their surroundings and the ripples in the fabric of space and time known as gravitational waves emitted when they collide.