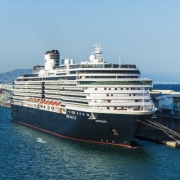 The travel industry has been one of the hardest hit sectors from the fall out of the coronavirus pandemic and many companies have seen financial struggles. And while the recent easing of lockdown restrictions across the world has brought some light relief however there is still trouble ahead for cruise ship company Holland America Line.

Following the fatal outbreak of Covid-19 on MS Zaandam in March, Lieff Cabraser Heimann & Bernstein LLP, Tousley Brain Stephens PLLC and Barrett Johnston Martin & Garrison, LLC have announced they are filing a federal class action injury lawsuit against Holland America as well as their parent company Carnival Corporation in the United States District Court for the Western District of Washington.

According to the lawsuit, which was filed ‘on behalf of cruise ship passengers who traveled on the MS Zaandam in March 2020 passengers were ‘negligently exposed’ to coronavirus while on their vacation.

In a statement responding to the filing, a spokesperson for Holland America said, “Our response throughout this process has put the safety and well-being of our guests and crew as the top priority, and has been informed by guidance by leading government agencies, including US Centers for Disease Control and the World Health Organization, as well as the evolving understanding from the medical community on best protocols.” The statement further stated, “Holland America Line does not comment on pending litigation.”

When the pandemic first broke several cruise ships experienced outbreaks of the virus, and with so many passengers in such a confined space it was easily spread, infecting many passengers. As well as the Zaandam the Grand Princess and the Diamond Princess also had cases of covid-19 and many were refused permission to dock at different ports around the world.

Although the virus was already tightening its grip on the world with the World Health Organization (WHO) declaring a global health emergency on January 30, the Zaandam set sail on March 7 from Buenos Aires in Argentina, with WHO upgrading the virus to a pandemic just four days later. The ship continued on its journey, stopping at Montevideo in Uruguay as well as the Falkland Islands and was due to finish on March 21 in San Antonio in Chile. There was also a high number of passengers that had booked for further cruises immediately afterwards with some not finishing their vacations until April 7 when they would arrive in Fort Lauderdale.

Lieff Cabraser partner Kenny Byrd commented, “This cruise was a life-threatening nightmare. Despite knowing of the risk and dangers of Covid-19 exposure on its ships, Holland America and Carnival put no meaningful screening or preventative measures in place on the cruises prior to departure and negligently continued to encourage guests to gather and mingle even as the virus spread through the passengers and crew.”

Although the ship’s captain did implement quarantine for the passengers it was not until March 22 after both guests and members of the crew started to show symptoms of the virus. The cruise ship, along with other cruise liners at the time, were refused permission to dock at several South American ports after their governments were concerned that they would bring the infection into their countries, however they were eventually granted permission to dock in Fort Lauderdale after traveling through the Panama Canal.

Four passengers lost their lives either during or after the cruise and although there is no confirmation that the cause of all the deaths was Covid-19, a crew member who died in a Florida hospital had tested positive for the virus.

One of the main points of the lawsuit is what has been seen as a failing by Holland America to implement any safeguarding measures when they realised there were risks to passengers and crew, specifically the information that the cruise was allowed to continue even though a ‘global health emergency’ had been declared at the end of January plus the fatalities on the company’s other ships.

The statement continued, “As plaintiffs understand the facts, Holland America and Carnival did not take any measures different from their typical preparations for a voyage, and made no COVID-19-specific efforts to prevent or contain contagion at the time of initial embarkation.”

One of the main plaintiffs of the suit is passenger Carl Zehner who was traveling with partner Leonard Lindsay and had tested positive for Covid-19. After being forced to remain on the ship due to local hospitals refusing Zehner admittance, he was eventually moved to several different hospitals within Florida before being placed on a ventilator, an ordeal that Zehner is still trying to recover from.

“This cruise was a life-threatening nightmare. Despite knowing of the risk and dangers of COVID-19 exposure on its ships, Holland America and Carnival put no meaningful screening or preventative measures in place on the cruises prior to departure and negligently continued to encourage guests to gather and mingle even as the virus spread through the passengers and crew.”

Where Is A Coronavirus Vaccination?

NASA’s Headquarters To Be Named After Mary W. Jackson
Scroll to top