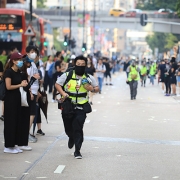 Hong Kong has fallen into recession as its economy contracted for a second straight quarter after more than four months of protests. The once-common lines of shoppers from mainland China outside luxury stores are gone.

The protests in Hong Kong began against a bill that would have allowed Hong Kong citizens to be extradited to mainland China, or scores of other countries where there’s currently no extradition treaty.

Critics of the bill, which was abandoned last month, feared it could allow any citizen to be arrested and swept out of the City state to face charges.

But as protestors in this video explained, the demonstrations became about other issues too – including police brutality, and attempts to undermine the “one country, two systems” formula created when Britain handed Hong Kong over in 1997.

Pentagon Releases First Images From US Mission That Lead to ISIS Leader’s...

How To Prevent Butt-Dialing
Scroll to top