How A Blood Donor Continues To Give During A National Crisis While Encouraging And Teaching...

You are here: Home1 / Features2 / World Feature3 / How A Blood Donor Continues To Give During A National Crisis While Encouraging...

Blood donations are an invaluable resources for helping millions suffering slowly recover. Unfortunately, the COVID-19 pandemic has greatly impacted donations, with the Red Cross declaring a national blood shortage. For frequent donator Arjun Mainali, now’s the time to not only contribute, but to encourage and inform others. 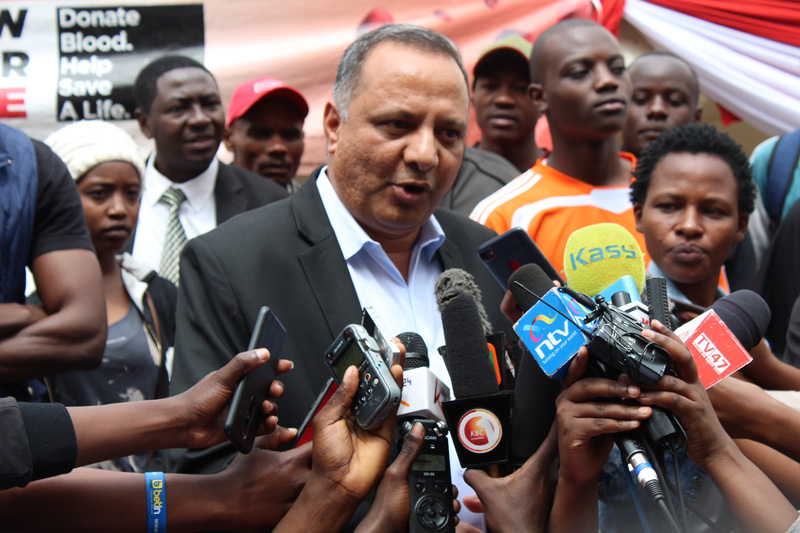 In the United States, the need for blood and platelet donations has never been higher. According to the American Red Cross, over 29,000 units of red blood cells, 5,000 units of platelets, and 6.500 units of plasma are needed every single day in order to help combat ravaging diseases such as cancer and sickle cell.

Those numbers have only increased with the ongoing COVID-19 pandemic, which in turn has caused blood drives to see a significant decline in donations – so much so, that the Red Cross declared a “national blood crisis” in January, citing its worst shortage in more than a decade. The medical organization explained that in recent weeks, it has had less than a one-day supply of critical blood types while having to limit distributions to hospitals.

Of course, in every bleak time, there are individuals who rise up, repeatedly serving while putting others’ needs ahead of their own. Arjun Mainali can certainly attest to this – over the last 34 years, he’s donated more than 100,000 millimeters of blood and counting in dozens of countries, saving 600 people. Even in the face of the Coronavirus, Mainali continued to give blood.

Still, despite his numerous donations, Mainali expressed that the reality is dire. “In Africa, every year, 600,000 native women die because they’re not getting blood at all the time. Even in the United States, every two seconds, somebody needs blood. [There was] about 118 million blood donations around the world in the last year, and that’s still not enough.”

“[With] these organizations, I motivated, I inquired, [and] I united all the blood donors into one place.”

Since 1989, Mainali has helped to establish three non-profit donor organizations — which include the Blood Donors Association of Nepal, International Napelese Blood Donors, and the Blood Donors of America — that help to organize blood drives, campaigns, and other activities.

Inspiration can play a huge role in building up others for the future. Mainali — a Nepal native — knows this first-hand, as he was personally inspired by Joe Thomas after reading a story about him during college in 1986. “He donated blood in the 1970s, and donated blood frequently. After that, one day I was visiting Bishal Bazar, Kathmandu and I saw the blood drive there [for the] first time in 1987.”

Mainali would go over to the drive and proceed to donate blood for the first time in his life. “After one week, I received my blood donor card and [learned] the blood was O positive. After that I frequently visited the blood service center in Kathmandu to learn about blood types in humans, how long they stay alive, [and] how frequently you can donate blood to save other people. There were a lot of things I learned from that blood center.”

During that time, Mainali witnessed an impactful event which would forever change his thinking. At the blood center, a man whose wife was in the hospital came and asked for a donation, but ultimately refused to donate his own blood out of fear. “That gentleman was scared and he never donated blood. So now I have to motivate the people to donate blood, and that donating blood is not harmful, but it can save the other peoples’ lives.”

Mainali later followed up his goal of motivation by cycling after a donation to prove there was no harm involved, and your body can still function like normal even during physical activity. “After one hour, I started to cycle, [and] I continued for 31 days. After you donate blood, you can still do the hard work. Look at me.” 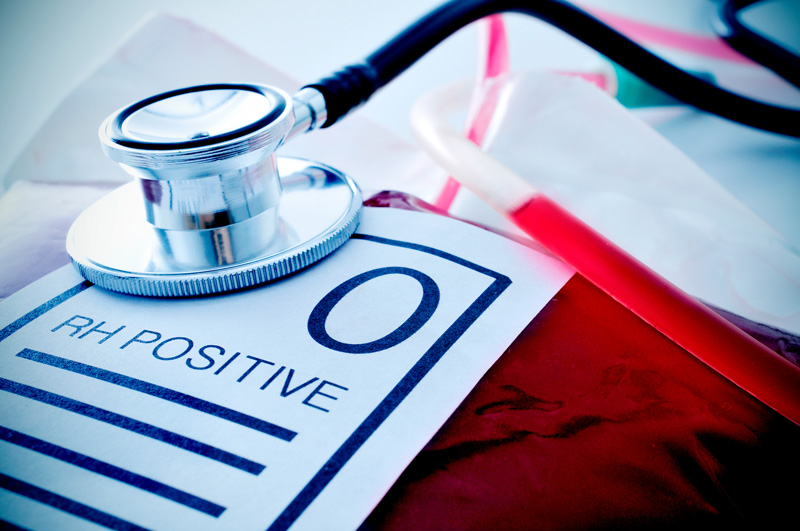 “I didn’t think about myself, I didn’t think to buy the house. I’ve always felt [I should] give my time and resources to the committee to promote blood donations.” 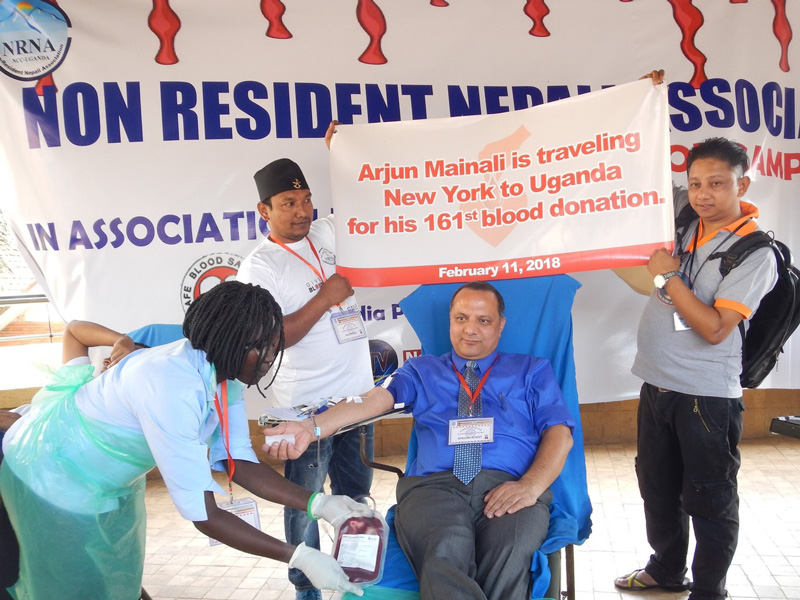 When the pandemic began in March 2020, it took a particularly heavy toll on the oft-traveling Mainali, who was set to head to Nepal. While he and his family stayed indoors, the Red Cross and New York Blood Center reached out frequently to him asking for donations or blood drives. Eventually, he relented and broke his quarantine in order to help. “I drove to the blood center in New York, and I donated there for the first time in the pandemic times.”

“I kept going to donate blood, and I emailed my committee member [and said], ‘Hey, donating blood is not harmful, it does not [hurt] the immune system. Can you sponsor the blood drive?’ So I told the committee [members that] this is the right time to do [good] for the community and the people.”

In nine months that year, Mainali donated blood and platelets 22 times — around 22 pints and 10,409 millimeters — in Connecticut and New York. That amount would average to 29 times over a full year, well above the recommended maximum of 24 donations in that span. “Nobody can donate that much blood 22 times in nine months, so that was extraordinary.”

Every person needs their rock, and for Mainali, it’s his wife who has been able to support the family while he directs his own income towards progressing blood donation efforts.

“From [my] job, I make the money, and I travel around the world [and] sponsor blood drives. My wife makes the money, and from that money she pays the rent and buys the food for the family.”

“I felt, ‘Oh my god, I’m a blood donor, I need to go there and donate my blood, [that way] I can save at least one person. I [also] need to motivate the Mawali youth.”

You might be hard-pressed to find a country Mainali hasn’t visited in his efforts. The 17 total countries — six in 2014 — include Ireland, Canada, and England, although one destination attracted his attention due to the horrific state the citizens were enduring, along with the urgent need for medical care. Reading the newspaper at work, Mainali noticed a story about Mawali, an East African country.

“My eyes caught the headline, which said the President told the people [to] eat mice and grasshoppers.” During that time in 2016, Mawali had been struggling with a nationwide food shortage. “The hungry people told him they’re going to die, they have no food, [and to] please do something for them. At that time, the President [Peter Mutharika] told his people, ‘You have to learn not to die. Whatever you find, whether grasshopper or mice, you eat that.'”

After hearing of the nauseating and tragic events unfolding, Mainali felt the urge to go to the country in order to help by donating, along with encouraging the citizens there to do the same. Following research, he discovered that more than one million people there have SIBs (self-injurious behavior) along with the hundreds of African women who die from not receiving a blood donation in time.

The only problem was, he didn’t have the funds needed to travel. Not to be deterred, Mainali went to take out a loan in order to accomplish his mission. “I went to the Geico Credit Union and said I need a loan of about $2,000.”

Mainali explained a snag came along when, with all the traveling and donating of both blood and money he had done, his credit score was low enough to where it looked like a loan wouldn’t be approved. “But because I’m employed by Geico and they have a Credit Union, they gave me the loan. Right away after that, I bought a ticket to Mawali.” 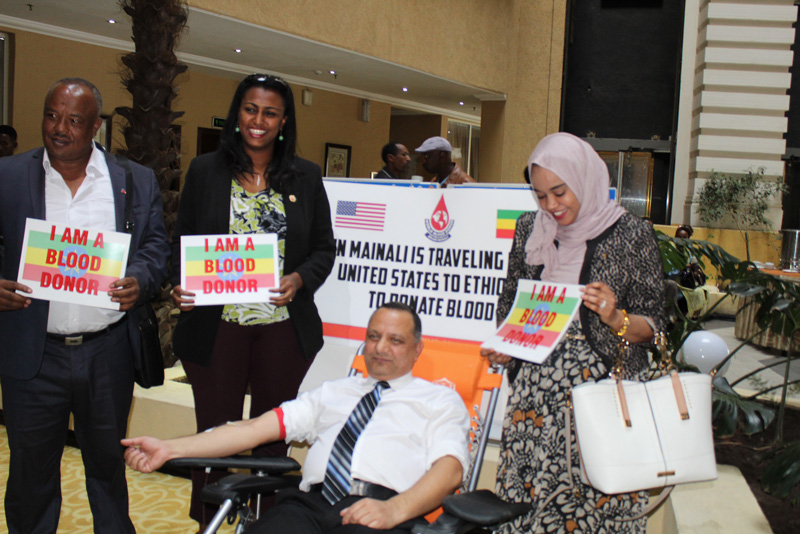 “I donated $500 dollars to sponsor the blood drive, [so that] people would be excited when they got the $500 dollars. At the sponsored blood drive, including me, 105 people donated blood in Uganda.”

Following a 20-hour flight and having to abide by Malawi’s rules in order to donate blood — an oddity among the cities and countries Mainali had previously donated in, he pointed out — he was finally able proceed at the blood center.

“About 30 people were together, including blood bank officers, reporters, [and] blood donors. I gave my speech [about] why I came here, how many times I’ve donated blood, [and] how I made the successful blood drive. After that, I donated my blood and donated $1000 dollars in order to motivate them. The blood bank’s people were very happy.” That kind of incentivization has helped to bring in donor numbers, which was also the case when Mainali made a stop in Uganda.

Mainali’s efforts have resulted in many honors, from high ranking officials like ministers to even a whole town — Oyster Bay, New York — which declared that Dec. 22 is “World Blood Donor Arjun Mainali Day.”

“I’ve received many recognitions in my area from senators [and] congressmen. Those [kinds] of things give me happiness, and this also encourages other people in the same way that the [cycling] in Nepal did.”

If Mainali’s story has inspired you, you can click here to find a blood drive near you and schedule an appointment. You must be 17 years old, in a healthy condition, and weigh at least 110 pounds to donate.

US Unlikely To End Covid Testing Rules For International Travel

Zelenskyy Pleads To Congress For More Aid In Address As Biden Issues $800 Million...
Scroll to top