Blog - Latest News
You are here: Home1 / News2 / Lifestyle News3 / How Burnout Can Be Bad For Not Only Your Mental Wellbeing But Physical... 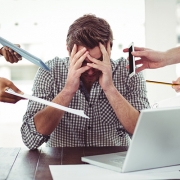 Burnout is normally caused by excessive and long-lasting stress, causing a state of emotional, physical and mental exhaustion. It is most commonly connected with chronic job stress or dissatisfaction; however, it can occur in other areas where one is exposed to prolonged stress from a ‘job’ – such as caring for an ill family member. Burnout syndrome has also been called ‘Vital Exhaustion’ has been known to lead to some physical ailments such as a reduced immune system or digestive issues, however, a study among men has now found that it can lead to an increased likelihood of having a heart attack.

The American Psychological Association defines Vital exhaustion as a state characterized by excessive fatigue, lack of energy, sleep disturbances, and feelings of demoralization.” Referring to the same condition, but instead with the title of ‘burnout’, the World Health Organization defines it as “Burn-out is a syndrome conceptualized as resulting from chronic workplace stress that has not been successfully managed. It is characterized by three dimensions: feelings of energy depletion or exhaustion; Increased mental distance from one’s job, or feelings of negativism or cynicism related to one’s job; and reduced professional efficacy…”

The term ‘burnout’ was first coined in 1974 by Herbert Freudenberger who defined the occurrence as “the extinction of motivation or incentive, especially where one’s devotion to a cause or relationship fails to produce the desired results.” Burnout is not considered a psychological condition but can still be identified in a number of ways, commonly, exhaustion, isolation, irritability, escape fantasies and frequent illnesses, according to Healthline.

It surpasses ordinary fatigue, making it difficult for people to get on with everyday activities and cope with stress. Burnout can lead to feelings of pessimism, cynicism and alienation. It can cause physical symptoms, such as headaches, stomach aches, digestive issues and a lowered immune system. It can lead to people feeling emotionally and mentally drained, tired and unable to cope – reducing performance in a variety of tasks. It shares some symptoms with mental health conditions such as depression – a person with burnout may not want to get out of bed in the morning for example.

According to Healthline, Psychologists Herbert Freudenberger and Gail North outlined the Twelve phases of burnout, which they reference as:

The Institute of Cytology and Genetics in Russia conducted study on vital exhaustion on men, which was presented to the European Society of Cardiology (ESC). It found that men with vital exhaustion are more likely to have a heart attack. Dr Dmitriy Panov from the study stated that the issue is a response to peoples lives, “particularly when they are unable to adapt to prolonged exposure to psychological stressors”.

The Huffington Post reported: ‘For the study, researchers used data from the WHO’s Monica Project – 657 men aged 25 to 64 years old in Novosibirsk, enrolled in 1994. Symptoms of vital exhaustion were assessed and participants were classified according to their level: either none, moderate or high. They were then followed-up for 14 years. Overall, two-thirds (67%) of the men had vital exhaustion – 15% had high level exhaustion and 52% had a moderate level – while 33% were unaffected. Nearly three-quarters (74%) of men with high blood pressure had vital exhaustion.’

The link between vital exhaustion and risk of cardiac arrest was examined, finding that men with moderate or high levels of ‘burnout’ had a 2.7-fold greater risk of heart attack within five years and a 2.25 greater risk within 10 years.

The the issue to be particularly prevalent in men who were divorced, widowed or never married – which was connected to less social support from living alone. Dr Panov stated: “which we know from our prior studies is an independent risk factor for myocardial infarction and stroke”.

The Huffington Post also reported that: ‘An analysis of studies on burnout found the issue is also a significant predictor of other physical issues like: high cholesterol, type 2 diabetes, heart disease, musculoskeletal pain, prolonged fatigue, headaches, gastrointestinal issues, respiratory problems, severe injuries and dying before the age of 45. Insomnia, depressive symptoms, and other psychological ill-health symptoms are some of the mental implications of burnout, the same analysis found.’ The study published in PLos One is entitled: Physical, psychological and occupational consequences of job burnout: A systematic review of prospective studies.

The American Dream: How American-Made Goods Are Helping A Nation Heal | Duluth...