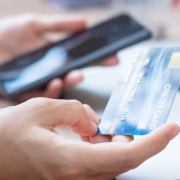 In light of the current coronavirus pandemic, you may have recently found that purchasing items or services from your local store, restaurant or business has been met with the new normality of ‘cash not accepted.’ More and more people have moved to card, contactless and mobile payments in a logical attempt to reduce social contact. The transfer of cash from one hand to another comes with the concern of an increased risk of spreading COVID-19, so many establishments have moved to accept card payments only. Further, when lockdown procedures were (or are in place) across the world, banks naturally closed, meaning that more and more people have had to look into online or mobile banking. Although, many countries have been moving towards a cashless economy with the introduction of cards, mobile and contactless payments for some time, this has meant an accelerated shift to the world of e-commerce much more rapidly than expected.

Cash payments have slowly dwindled as more and more people have been forced to turn to digital services however reluctant they were before. In the UK it was reported that cash withdrawals from ATM were down by 60% this year, especially as many businesses have made the independent choice to go cashless. In June 2020, according to The Guardian, in the UK ‘a recent study of more than 2,000 people by the consumer group Which? found that one in 10 people were refused by shops when trying to purchase essential items with cash during the pandemic. Which? has long been calling on the government to protect cash as a payment option, with some success: the chancellor of the exchequer, Rishi Sunak, pledged to protect access to cash in his 11 March budget.’

COVID-19 has not only forced customers to switch to electronic forms of banking and payments, but businesses too. Many businesses turned to online sales for the first-time during lockdown procedures, in order to serve customers and cultivate a revenue stream. More and more people looked to online services too, for the first time, from grocery to clothes shopping. In a note of positivity on these shifts, Wired reported: ‘the pandemic has proven a catalyst for growth, innovation and social change. And it has revealed that financial tools which are flexible and offer choice can empower people and businesses even in the middle of a crisis, sparking new innovation in both banking and business.’

Research from Mastercard, reported in Wired, found that sixty-one percent of people were using contactless payments more often than before the pandemic, and over half of people are now using banking apps more often. In those that were surveyed, 84% found that digital banking apps were easier to use than expected and over two-thirds are more likely to look into utilising other digital tools for payments. Over the course of the pandemic, some banks have made their digital services more supportive and accessible during these difficult times. Like the shift to remote working, more consumers and businesses alike have found that these digital services can be flexible, supportive and sustainable.

Wired also wrote: ‘”It’s estimated that in the UK six million adults downloaded an online banking app for the first time,” says Charlotte Crosswell, CEO of Innovate Finance. “That’s 12 per cent of the working population, which is incredible.” And that change is here to stay: nine out of ten people who used banking apps for the first time during lockdown said they would keep using them after the pandemic, while two-thirds said the same about digital payments. Mastercard data revealed a 40 per cent leap in contactless transactions growth. “Contactless is one of those innovations that Covid has further accelerated the adoption of,” says Stoddart. “Now we’re going to see the groups that weren’t using contactless and mobile banking definitely using it outside of the crisis.”’

Digital services and banks have also been working to improve fraud prevention on their services which has seen an increase concurrently with the increase in digital usage.

In an interview with Forbes, Paul Marcantonio, Executive Director of UK & Western Europe at ECOMMPAY, stated: ‘there is no doubt that we are heading toward a society where cash is used less. With the likes of Google Pay and Apple Pay, this type of transition is being made easier and easier, and it makes total sense. As soon as the lockdown was eased, and customers were able to go to restaurants, shops and even bars, almost all venues were only accepting contactless payments. This has accelerated the move towards a cashless society. It’s believed that Sweden could be cashless by 2023 and, quite surprisingly, the US could be cashless by 2026.’

The Buckeye State, the Jewel of the Midwest
Scroll to top